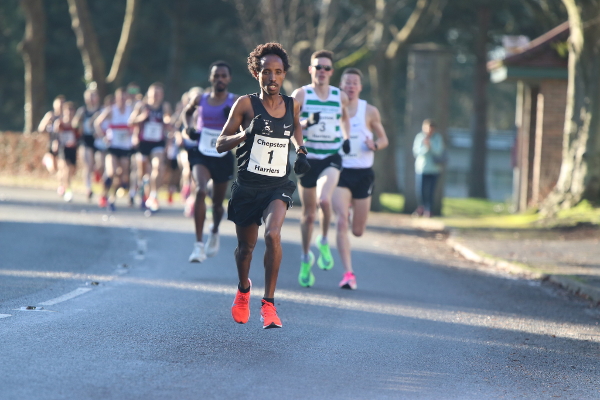 Omar Ahmed speeds away to a winning 10K

Omar Ahmed was in sprint condition as he ran to victory and a successful title defence at Sunday’s (19 January) Speedway 10K. The cold and frosty weather seemed to give him extra momentum rather than slow him down.

Ahmed is a member of Birchfield Harriers, whose motto “Fleet and Free” was certainly applicable on this occasion, was feeling the need for speed at this fast 10K which is about going full-on from the start. He was part of an impressive line-up consisting of runners who were capable of sub-35 or quicker on a very flat, two lap course at Beachley, Gloucestershire.

One of four open races from Chepstow Harriers it contained all the elements for a good thrash as well as providing the next step up for any promising club runner looking to test themselves against top level competitors.


The track near the Community Hall was useful for warming up before the start at 12 noon. Then away they went with Omar Ahmed at the front along the fast route with enough for an ‘eyeballs out’ sprint to the finish.

Ahmed won for the second year in 28:58 – knocking 19 seconds off his 2019 time of 29:17 and recorded a new course record as well. Phil Norman of Woodford Green AC with Essex Ladies was second in 29:15 and Joshua Grace of Aldershot Farnham & District AC third in 29:31.

Chepstow Harriers would like to thank Hayesgate Osteopathy, 1 Rifles and Chepstow Garden Centre for their ongoing support.