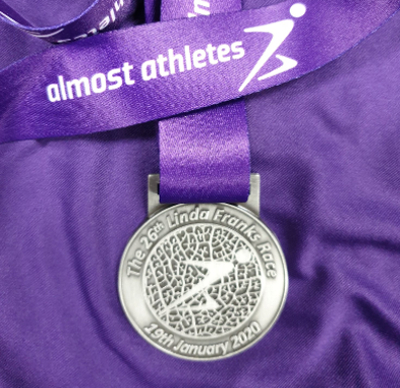 Part of the Gloucestershire AAA Road Race series, the race was set up in tribute to the much-missed Linda Franks who passed away suddenly in 1994. 20 years later demand remains high for places with organisers, Almost Athletes introducing a phased system to give everyone a chance to enter.

The weather was cold but it was a sunny morning for the 26th Linda Franks 5 Mile as over 270 runners made their way from the race HQ to the start 200 metres away. They headed up a small incline at the start before continuing along a flat two lap course around Hatherley followed by a downhill sprint finish.

James Bellward of the RAF flew to victory in 24:10 and a new course record, beating the 2019 winner Steve Kenyon of Gloucester AC into second place in 27:04. Kenyon was a second slower than last year. Anthony Bailey of Cheltenham & County Harriers took third place in 27:28.

Rachel Felton of Shaftesbury Barnet Harriers, the 2019 women’s race winner in 28:10 was first again in 2020, finishing in 27:56 and claiming a new course record. Tracy Hinxman of Gloucester AC finished second in 29:09 and Helen Knight of CLC Striders third in 31:25.

In the wheelchair race, Ed Grazier of Cheltenham & County Harriers won in 26:21 and set the third course record. His teammate Les Hampton was second in 37.20.

The next event in the Gloucestershire AAA series is the Staverton 10 Mile this Sunday (26 January) at 9am.