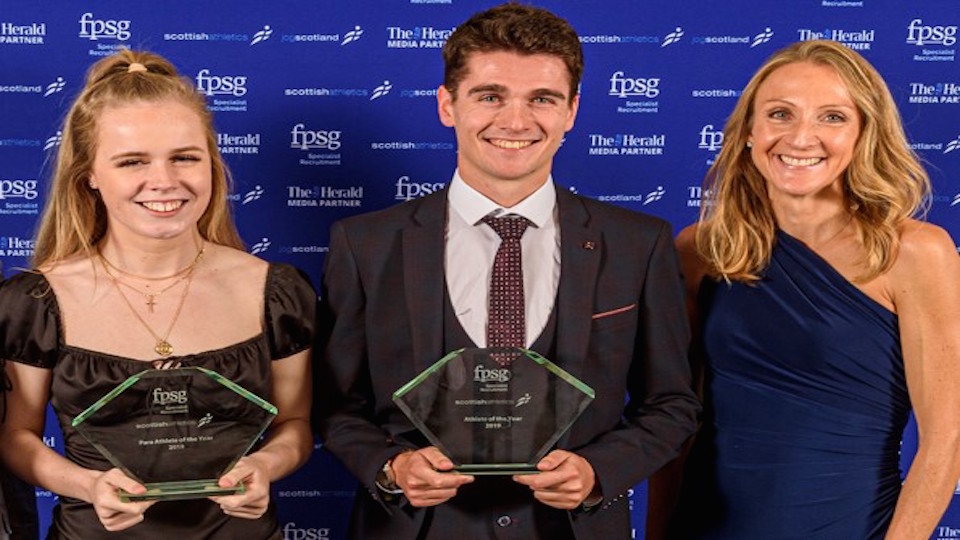 Winners to be revealed during a special programme on SA YouTube channel on Saturday, 10 October

Nominations have now opened for scottishathletics’ 4J Studios Annual Awards – and the governing body needs everyone’s help to draw up the shortlists.

As in previous years, the aim of the awards is to recognise and acknowledge the contribution made by athletes, volunteers, coaches and clubs all over Scotland throughout the past year.

But in recognition of the fact that 2020 has been a year like no other, several of the usual categories have been cancelled and others created.

As you might expect, this year’s judges are particularly interested in hearing about the work of the nominees during the COVID-19 pandemic to keep athletes active and to engage them with their club and/or the sport.

All nominations must be received by midnight on 30 August, and be in one of the following categories:

4J STUDIOS INNOVATION AWARD
This special award just for 2020 recognises the innovative approach shown across the sport to engaging athletes, clubs and volunteers during the COVID-19 pandemic. Nominations can be for an individual, club or event organiser and should focus on the inventive approach taken by the nominee in continuing to deliver athletics during the period from 23 March 2020.

4J STUDIOS IMPACT CLUB OF THE YEAR
This award recognises a club that has made a major impact over the last 12 months, in terms of growth and/or retention of members, recruitment and development of volunteers and coaches, organisation and delivery of the club’s business, development initiatives or wider community impact.

4J STUDIOS OFF-TRACK CLUB OF THE YEAR
This award recognises the club that has shown strong development in off-track events (hill, cross-country, fell and road racing), meets the needs of its athletes at every age and stage of their development, has performed well across the year and/or shown a strong improvement in performances and demonstrates an innovative approach to competition by supporting their athletes in gaining experience in off-track running.

JANICE EAGLESHAM MBE PARA DEVELOPMENT CLUB OF THE YEAR
This new award – for both 2020 and beyond – recognises innovation shown by clubs to develop athletics provision for, and the performances of, athletes with a disability.

Nominations should focus on the work done by clubs and their volunteers/staff to develop opportunities for, and retain, participants with a disability in athletics. They should also highlight the approach of the club to developing the performances of their athletes, and any improvements in performance witnessed in the last 12 months.

4J STUDIOS CLUB COACH OF THE YEAR
This award recognises the contribution of the thousands of coaches delivering regular training sessions in scottishathletics member clubs.

Nominations should focus on all or some of the following: what the individual coach has done to support the development of athletes within the club; the role they’ve played in retaining the athletes; any coaching work they’ve done in the wider community to promote the sport and club; and anything else that sets them aside from other club coaches in Scotland.

4J STUDIOS DEVELOPMENT COACH OF THE YEAR (12 years +)
This award recognises the coach who has had an impact on the development and performance of the athlete(s) they are working with.

Nominations should highlight all or some of the following: how the coach has demonstrated an understanding of the needs of the athlete(s); steps taken to help the athlete(s) reach their potential; their commitment to developing themselves to support the athlete(s) they’re working with; and anything else that sets them apart from other coaches at this level.

4J STUDIOS VOLUNTEER OF THE YEAR
This award acknowledges the impact of the thousands of volunteers contributing to the development of athletics clubs in Scotland every year.

Nominations should outline the reasons why an individual has demonstrated an outstanding commitment to the sport and the club, as well as what they have done to set them apart from all other athletics volunteers in Scotland.

4J STUDIOS TECHNICAL OFFICIAL OF THE YEAR
This award recognises the large number of people that are involved in the delivery of competitions – including virtual competitions – at all levels of sport, as well as the people within clubs.