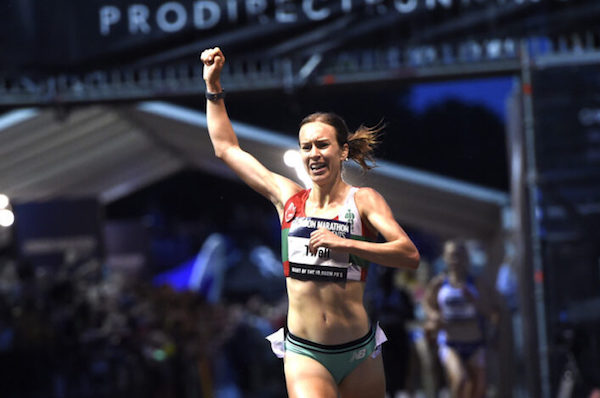 Night of 10,000m PBs a night to remember for Twell & McColgan

The event – known as the Night of the 10,000m PBs – also serves as the British Championships for the distance.

But while Twell won the race, she took home only the British title: the athlete chose to run in her Aldershot, Farnham & District club vest and not as part of the European Cup.

Twell crossed the line in 31.08, well inside the qualifying time for the World Championships in Doha, and the sixth fastest time by a British runner.

But Twell wasn’t the only Scottish female to triumph. Eilish McColgan finished third behind Twell, with her time of 31.16 also within the world championship standard. McColgan’s run earned her silver in both in the British and European Championships and helped take Team GB and NI to a team gold for the second year in a row.

In addition to securing their seats on the plane to Doha, Twell’s and McColgan’s impressive runs moved them up to second and third places respectively in the all-time rankings of Scottish women.

Although a night for serious running and serious competition, the Night of the 10,000m PBs follows a unique format, designed both to delight spectators and encourage fast times. Not only are the usual eight lanes of the track at Highgate reduced to two, but the world-class runners passed through beer tents full of enthusiastic spectators on the straights on each of their 25 laps.

The event also used, for the first time in the UK, the electronic pacemaking technology that will become standard at IAAF events later this year. The ‘Wavelight’ system put a moving line on the track to mark the pace the athletes needed to run to meet the Doha standard.

Organiser Ben Pochee, who came up with the unusual format, told the BBC: "I still find it amusing what the event has become. I like to joke that we are the Glastonbury of the 10,000m."