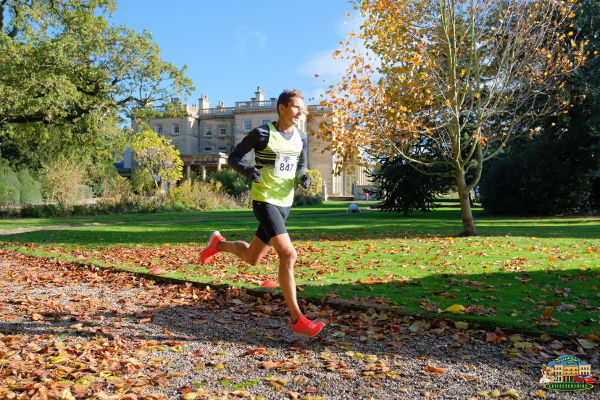 Nick Samuels moved up through the gears to win the men's race at the first Leicestershire 10K on a chilly Sunday morning (28 October) in Loughborough. The gravel at the end tested everyone's, including Nick and fastest woman Alice Daniel, sprint finish.

Samuels sped over the gravel to cross the line in 32:34, over half a minute ahead of Karl Welborn of Team Marathon Road who came second in 33:08. Sylvain Letendart of Tamworth AC was third in 33:26.

This was the second of two races at Prestwold Hall, the other being the Leicestershire Half Marathon in February and both organised by RunThrough Events. The Grade I listed building is the ancestral home of the Packe-Drury-Lowe family and includes 1,000 hectares of farmland, Wymeswold Airfield and a motor racing circuit. It is a popular venue for weddings, conferences and corporate events and added a touch of grandeur to this inaugural 10K.

The weather was cold and bright as over 700 runners gathered in front of the Hall ready for a 9.30am start. They were led through a warm up before setting off along a flat course through scenic grounds, heading towards the airfield and motor circuit. The runners continued around these before turning back towards the Hall and the gravel finish.

There were themed medals - sports/racing car and a bride and groom - and goody bags for all the finishers. Over £600 was raised for MOVE – a charity that uses the power of sport to support children and young people with cancer. Volunteers from this charity played a major role in the Leicestershire 10K’s successful debut.