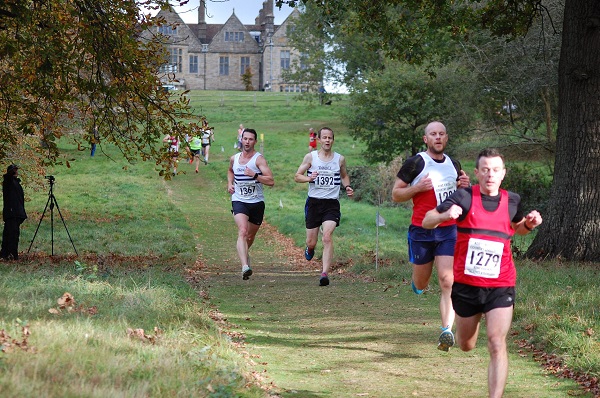 Hills at Somerhill in the Kent Cross Country League

Cross country running has to be the purest expression of our wonderful sport. runABC South reporter Alan Newman is a Tonbridge AC coach and went behind the scenes at his own club's promotion of the second race in the Kent Cross Country League on Saturday (27 October) and brings us his personal report while icing some sore calf muscles!

Cross country running has been the backbone of British endurance running for hundreds of years and the first Kent Championships were held in 1921. The Kent League has two events in October and two in November, with the league final for seniors only in February. December is reserved for the Masters Championships and all age groups have their own championships in January.

The Schools at Somerhill, Tonbridge is one of the most popular venues with the Jacobean mansion in the background and a stunning landscape of 150 acres providing a variety of course layout options, all of which involve some hills.

There are races for young athletes from under-13 up to senior men and women. Tonbridge AC adds mile races for budding U12 cross country runners and all races are completed within a frantic four hours. The apparently seamless organisation requires an army of volunteers to set up the course, provide refreshments, car parking, marshals and officials. Chip timing through race numbers has been introduced this season and certainly helps to provide rapid results.

It was a cold, windy day with sunny intervals. One competitor remarked that the only warm place was in the portaloos! The going was 'good to firm' and would take a short spike, studs or even road race shoes. Pre-race chatter centered around choice of footwear. Your reporter chose spikes, which were fine for grip but lacked cushioning – hence the tight calf muscles.

The senior women's race (pictured below) was a classic encounter between the experience of Maria Heslop – one day shy of her 51st birthday – and Sian Roberston (24) who was less than half the age of her Tonbridge team-mate. After a thrilling 5k the first round result was reversed as youth prevailed by 20 seconds. Heslop had to battle hard to preserve second place from the fast finishing Becky Morrish (Paddock Wood) who enjoyed her finest race to date.

As the women were finishing, the men lined up and were off for three laps totalling around 10k. GB mountain running international Maximillian Nicholls (Tonbridge) was the pre-race favourite, given the hilly nature of the course, but the winner here in 2015 was undone by Abel Tsegay (Invicta East Kent). The former Eritrean athlete won the Amsterdam Half Marathon last week and is surely due an England vest soon as he powered to victory by 10 seconds from Nicholls and Tonbridge's Ben Cole.

Way back in the pack your correspondent enjoyed a race-long battle with club colleague Mark Schofield. Unspoken respect between rivals meant we gave each other space but no quarter as we battled into the top 200 places – just. The younger man prevailed, by four seconds. Mark's a marked man for the next race!!