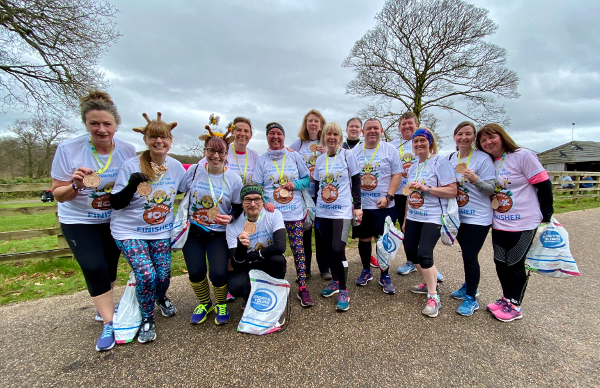 Over 1,200 participants went on safari at the new Knowsley 10K on Sunday (15 March) and enjoyed a run on the wild side at this popular location. One runner had an adventure of her own...

In regard to COVID-19: the organisers followed advice from experts including the World Health Organisation (WHO) and local, regional and national health authorities.

The inaugural Knowsley 10K and MyFirstMile were organised by The Running Bee Foundation and held at Knowsley Safari Park. The atmosphere was buzzing as runners gathered at The Foot Safari, ready to roar around a fast and flat course. They passed Knowsley Hall then followed loops around the surrounding areas before heading towards the finish.

Kirsty Longley was leading the overall race before, unfortunately, ending up in the Safari Park at 5K and as a result of being lost, ran more than the 10K distance. However she took her misfortune in good spirits and was happy to record a 'good training run'.

Aiden Moyles was the winner in 36:18 followed by Miras Eskander of Northern Veterans AC in 38:48. Shaun Ashworth of Stone MM was third in 38:55.

Lisa Gawthorne of Liverpool Pembroke & Sefton Harriers & AC was the winning female in 39:44. Debbie Kirkham of Lions Running Community was second in 44:39 and Flossy Woodward-Moor third in 45:20.

10K finishers received an ethically sourced medal and Ron Hill technical T-shirt along with a carton of water.

Event Logistics & Sponsor Activation Manager, Kevin Harmer was delighted by the race's successful debut saying: “It is an uncertain time for events but we were in the lovely outdoors at Knowsley and followed all the government advice and had plenty of sanitizers and wipes at desks for runners to use.”

They look forward to hosting the event again in 2021 and invite more people to join them.