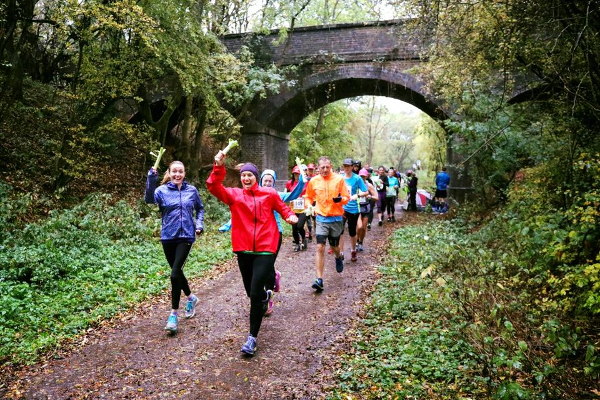 Fanfare for the Green Leek Run

A rousing repertoire from Royal Spa Brass Band kept everyone’s legs moving at a tough Green Leek Run on Sunday (13 October). They made a difference at this record breaking, multi-terrain event.

In what was the largest number of entries to date, the fourth Green Leek Run 10.5K was on song despite the rain and muddy conditions. This fundraising event was organised by volunteers from Burton Green and Leek Wootton Primary Schools with proceeds donated to both schools.

Former world record holder David Moorcroft sent runners on their way at 10am from the Kenilworth Greenway near to Burton Green Primary School. They continued along the disused railway line then across Abbey Fields with views of Kenilworth Castle before encountering a change to the original route for safety reasons. This minor diversion took them along a tarmac path followed by boggy fields, paths and trails that proved to be a challenge for many.

However, help was at hand courtesy of Royal Spa Brass who along with the marshals and spectators encouraged runners throughout. 'Sweet Caroline' was one of several tunes that motivated them to the finish at Warwickshire golf club and a greeting from David Moorcroft who stayed to help.

Callum Hanlon of Leamington C & AC was the winner in 35:47 followed by Andy Crabtree in 37:59. Connor Carson of Kenilworth Runners was third in 39:55.

Marie Matthews of Kenilworth Runners was the winning lady in 42:02 followed by Natasha White of Northbrook AC in 43:54. Matthews’ teammate Laura Pettifer was third in 44:00.

There was a medal for every finisher and best of all, homemade cake that in the words of one runner, was worthy of a place on the Great British Bake Off.