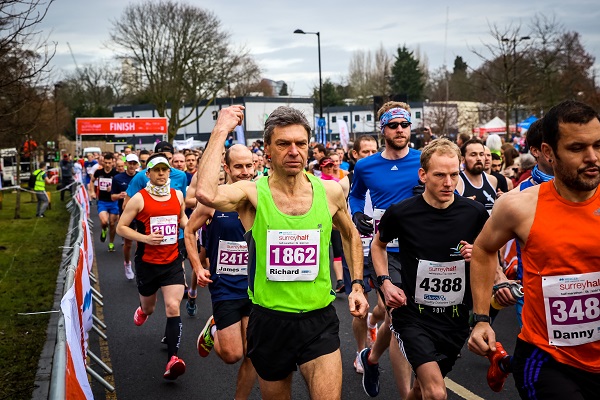 No Mercy From Overall At Mercer Surrey Half

Surrey-based health columnist and personal trainer Ben Short kicked off proceedings with a mass warm up broadcast on a huge TV screen. The multi-award-winning Mercer Surrey Half Marathon was taking place for a fifth year from Woking Leisure Centre.

Surrey’s celebrity chef Steve Drake was among the runners who took part in the race, which follows a fully-closed single-lap route from Woking towards Guildford and back. The notably picturesque race was made even more enjoyable by performances from local bands on the route, including marching band Cadence Drum & Bugle Corps and Surrey Youth Brass Ensemble, who performed tunes that had been requested by competitors.

Phil Howard, Jack Robinson and Mark Woodward from headline race sponsor Mercer were the winners of the Morrisons Solicitors Corporate Challenge. The whole team finished in 04:31:50.

Pre and post race attractions included the buzzing event village with a double decker biscuit bus (where one could enjoy refreshments with a birds eye view of the event), face painting, live music, charity stalls and a number of food and drink vendors.

Mick Barlow, from the British Association of Road Races, extended his congratulations to the organisers and awarded them with BARR’s Gold Standard for another year, crediting their: “Exceptionally high standard of race organisation and commitment to runners.” Mercer Surrey Half Marathon, delivered by aat-events, raises up to £0.4 million for good causes every year.

There were some future stars in the 550-strong field of children taking part in the sell-out Kids Race, one of the UK’s largest closed-road running races for children aged 6+.