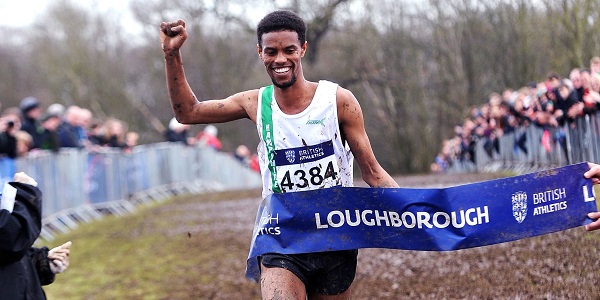 Mahamed Mahamed (Hampshire - pictured) and Phoebe Law (Surrey) are the new UK Inter-Counties and British Athletics Cross Challenge champions after a true mudfest of a race at Prestwold Hall, Loughborough on Saturday (10 March).

Defending champion, Andy Vernon (Hampshire), was hampered by a wardrobe malfunction to one of his shoes and was a distant fourth on this occasion. The top six was completed by Carl Avery (North East) and James Hunt (South Wales).

“I’m really happy with that. It was my last cross-country of the season so I just wanted to see how I felt and go for it,” said Mahamed.

Middlesex had the most consistent team and took the counties trophy from Lancashire and Surrey. There were 31 UK counties represented in this prestigious event and 284 men completed the glutinous course.

Phoebe Law collapsed with exhaustion after securing her first UKCAU senior title and the overall British Athletics Cross Challenge trophy. She didn't need to work quite so hard to add to her Southern and English National titles last month as the former European champion, Gemma Steel (Leicestershire & Rutland), who is preparing for the World Half Marathon later this month, was 42 seconds in arrears at the tape.

Law, who was 10th at the European Cross Country in December, said: “It was really tough today, especially with Gemma chasing me, which was really terrifying.”