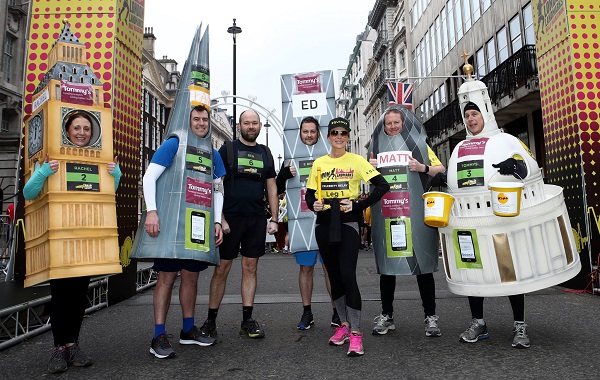 Don't just run the London Landmarks Half Marathon – be one!

The headline event for this weekend is the second London Landmarks Half Marathon on Sunday (24 March). The inaugural event saw 10,000 runners assemble in Pall Mall to view London's iconic sights and in some cases the runners came dressed as the landmarks!

London Landmarks Half Marathon started as an idea in 2014 by baby charity Tommy's with a need to double their annual fundraising from £4 million. The bold decision was made to launch a brand new half marathon that took in the City and the capital's landmarks, with the strap-line: 'The Grand. The Quirky. The Hidden'.

The event was an instant hit, with 9,647 runners home in 4:35:05 on 25 March 2018. The first two finishers set a Guinness World Record on the fabulous route between Pall Mall and nearby Downing Street, taking in such features as Nelson's Column, London Eye, St Paul's Cathedral, the Cheese Grater, the Gherkin, the Tower of London, the Shard and Big Ben.

There were 174 runners inside 90 minutes in the inaugural event and organisers are hoping for 13,000 entrants for the closed road course through Westminster and the City. The target of £4 million for Tommy's charity, which funds research to prevent miscarriages and stillbirths, was exceeded last year.

London Landmarks Half Marathon saw over 70,000 applicants for the first event. Awards such as Fundraising Event of the Year and Medal of the Year have propelled LLHM into the spotlight since the first running of the event. 10 music stations; 17 charity based and 125 other cheer stations; 25 music performances; seven historical tours and three treasure hunts all combined to make LLHM a unique new addition to the distance running calendar.