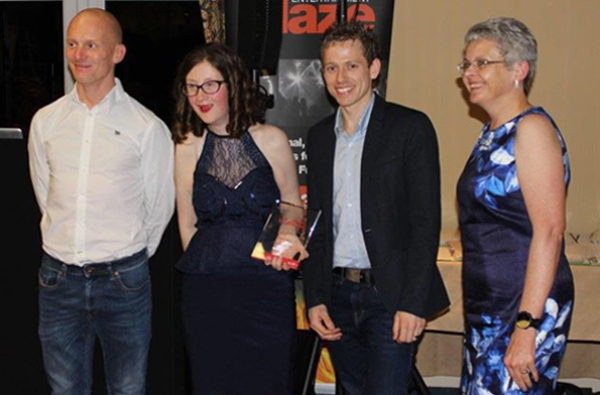 Charity marathon runner Charlotte Aspley nominated her club, Lichfield RC for the England Athletics Inclusion Award so the club had plenty to be proud about at their 35th birthday celebration.

27-year old Charlotte Aspley has been a member of Lichfield RC for several years and is a popular and admired member who is determined to succeed in all aspects of her life. She has Mosiac Down Syndrome, a rare condition that affects her sight, speech, muscles and bones, and requires her to be accompanied by a guide runner in her marathons.

Since joining Lichfield RC several years ago, she has grown in confidence and ability as a runner, thanks to the help and encouragement from its members including Richard Bravington (her guide runner), Ann Schwarzenbach and Daniel Floyd. Another important figure was the late Bob Houghton, a founder member of the club and instrumental in Charlotte’s achievements who sadly passed away in 2017. Charlotte ran this year’s London Marathon in honour of her mentor as well as fundraising for St Giles Hospice, Whittington and Mencap.

This inspirational lady wanted to thank Lichfield RC for their support not to mention their friendly, welcoming approach that enabled her to complete several marathons on behalf of charity. She nominated them for the Inclusion Award West Midlands as part of England Athletics Volunteer Awards 2018 and they were voted the winner!

She presented the club with this award at their anniversary meal and praised them for their inclusivity, making her feel part of the running community. This was reiterated in her nomination where she says: “They are always willing to go the extra mile and put themselves out for their members.”