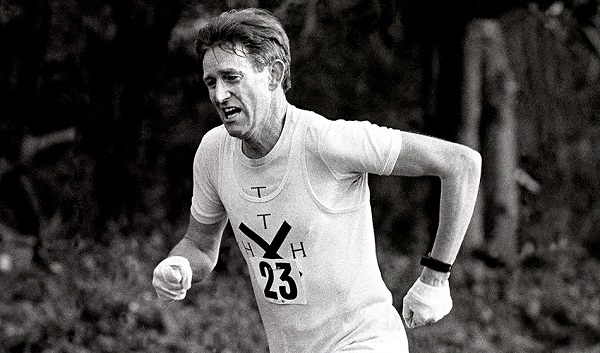 John Bryant (pictured above on Wimbledon Common) died peacefully, aged 76, at his Surrey home on Thursday, 30 April 2020. runABC South reporter Alan Newman pays this tribute to the softly spoken journalist, author and athlete, who played such a pivotal role in the phenomenal success of London Marathon.

John Bryant was born in the Somerset village of Haselbury Plucknett, where he often used to impress schoolmates by racing and catching the school bus as it wound through the village!

He was to go on to complete 29 London Marathons, many after he was hit by a car and told he would never walk again. A close friend and confidante of Chris Brasher, Bryant was an unsung founding father of the London Marathon and actually led the inaugural race in 1981, after which he said: “It was very cold, wet and windy. There were helicopters overhead, all sorts of shenanigans going on and only one start, so it was a hell of a squeeze to get through the gates. But somehow I managed to get to the front and I actually led the race for quite a while. I ran quite fast for the first 10 to 12 miles, but then I started to get a pain in my hamstring and by three or four miles from the finish I could hardly walk”. He finished in agony in 2:45.

Bryant was an Oxford University Blue and captained the Oxford University cross country team. He later gave 50 years unstinting service and became president of his beloved Thames Hare and Hounds and was chairman of the London Marathon Charitable Trust.

He started his journalism career at the Edinburgh Evening News and ended up as the Daily Telegraph's editor-in-chief. His newspaper career was not without controversy as he also held senior positions with The Times and Daily Mail – it was when he was features editor with the latter title that he met Zola Budd and he became one of the few people that the South African born athlete trusted when she came to Britain in 1984. He later helped Budd with her training as she broke the world 5000m and 2000m records, infamously competed for GB in the 1984 Olympics and won two world cross country titles.

As an author, John Bryant is best known in athletics circles for writing – 3:59.4: The Quest to Break the 4 Minute Mile – about Roger Bannister’s epic feat in 1954.

Among the many tributes that have poured in was this from Hugh Brasher, event director of the Virgin Money London Marathon and son of race founder Chris: “John was an incredible supporter, not only of the London Marathon but also of my father, Chris. His wisdom and knowledge across sport and media were immeasurably helpful and their friendship, camaraderie and enjoyment of a long run, followed by a pint or two plotting their next escapade, are memories I will always treasure.”

John Bryant is survived by his wife Carol, sons Matthew and William, and six grandchildren.