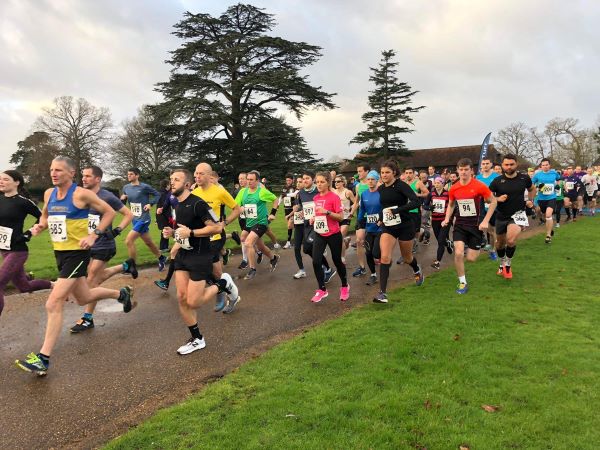 The occasion was the 59th staging of the historic Hogs Back race from the Loseley Park Estate, near Guildford. The clear views from the top of the tough climb up The Mount across the Surrey countryside were magnificent but there was no time to admire them for the leaders.

John Sanderson (35:53) – the 2016 and 2017 winner – ran the fastest time yet seen on the revised, undulating 11.4K course that includes a short section of gravel track. He was followed home by club mate and defending champion George Dollner (38:14) who used the benign conditions to run a minute faster than before. Ben Chown (26.2 RRC, 38:51) completed the podium as six men broke 40-minutes for the first time at this venue.

Times were excellent further back as nearly half the 619 finishers beat the hour and all runners were safely home in 1 hour 45 minutes.

Guildford and Godalming AC formed in 1952 as a result of a merger between Guidford AC and the much older Godalming AC (founded 1924) and has a membership of more than 400. The club is possibly best known for its promotion of the famous Hogs Back Road Race each December for the past 59 years and is looking forward to the 60th anniversary race in 2020.

The host club would like to thank sponsors Fitstuff, Tribe Sports and the Hogs Back Brewery plus all the vital volunteer marshals and officials for their continued support.