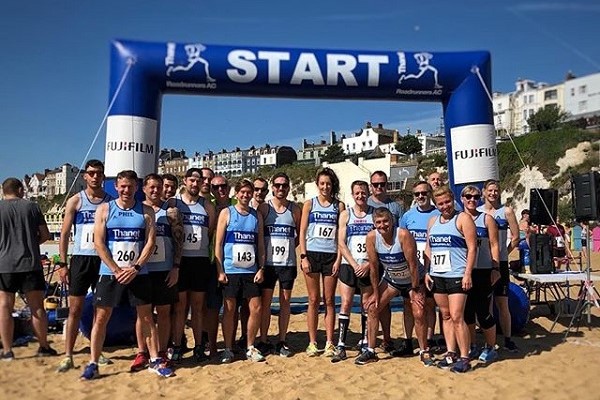 ...and then they all ran back to Broadstairs in the annual 'Harbour Wallbanger' race. runABC South reporter Alan Newman was among the 256 finishers in this fun event on the East Kent coast on Saturday (22 June).

The race distance of a mere 7kms on the beach sounds innocuous enough but with a tidal range of around 5 metres, part of the route beneath the cliffs between Viking Bay, Broadstairs and Ramsgate Harbour (hence Harbour Wallbanger) is inaccessible for most of the day, so timing of the start is crucial!

The twice daily washing of sand and rocks means conditions change constantly and this year there was more bright green seaweed than usual strewn across the rocks to add an additional challenge to the variable consistency of the sands.

All of this was no bother to those at the front of the pack, although times were generally two minutes slower than usual. First man to reach the turn and the obligatory requirement to tap on the harbour wall was M40 Ted Mockett (Ranelagh Harriers) who stayed strong on the return to Viking Bay to splash through the finish in 28:17. The men's podium was completed by Thanet Roadrunners' Jay Bailey (28:53) and M45 Chris Brenchley (28:58) with an age group award for M50 David Sadler (31:14) in the top ten.

Liz Weeks' post race verdict was: “This is one of my favourite races of the year. I really enjoy the challenging mix of sand, rocks and seaweed and no two years are exactly the same”.

Jo Quantrill added: “Many thanks for recognising the older runners. My last time as a W55 so it meant a lot. Well organised race as always and the green weed was an added bonus”!

Thanet Roadrunners donates part of the entry fee to Thanet Lifeguard Club, which encourages water safety awareness and lifesaving skills to the people of Thanet and the wider community. The club is part of Surf Life Saving GB, with more than 6,000 volunteers helping to make our beaches a safer and more enjoyable place for everyone.