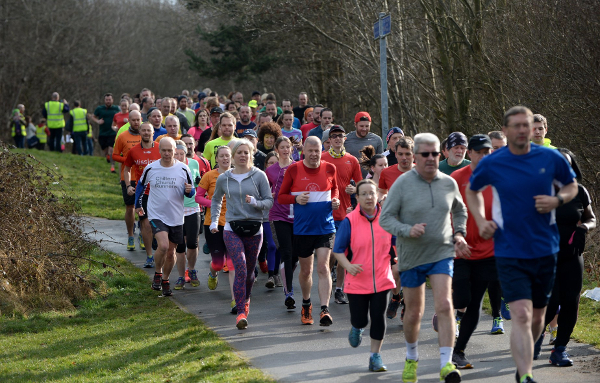 Saturday 24 March saw the successful debut of the Wammy parkrun in Newcastle under Lyme. There was even a special cake to celebrate the new arrival to the parkrun family.

The Wammy parkrun was the culmination of hard work and commitment from a dedicated team of people at Newcastle AC and Newcastle under Lyme Borough Council. Their goal was that of hosting a parkrun in an accessible location and open to everyone, irrespective of age and ability.

At 9am, 226 people including 31 first timers started their run (or wak) along an out and back 5k route which started and finished at the children’s play area on The Wammy. Weather conditions were favourable and thanks to the high-vis heroes, everyone had an enjoyable and safe run with their energy levels topped up via the ‘wham’ bars courtesy of Run director Andrew Vickerman.

William Neill of City of Stoke AC was first across the line at this inaugural parkrun in 16:20. Kerry Marchant of Newcastle AC was the first female in 20:01.

There was post-run tea and cake at ‘Ken’s Cafe’ via the clubhouse at Newcastle AC. Wammy parkrun volunteer and club stalwart Ken Richards is famous for his refreshing brew and Saturday was no exception with thirsty runners queuing up for a much needed cuppa. This was accompanied by a slice of ‘Wammy parkrun’ cake.

The organisers would like to thank everyone who made this possible including Newcastle under Lyme Borough Council and Ibstock for their funding and the last but not least, the all-important volunteers.