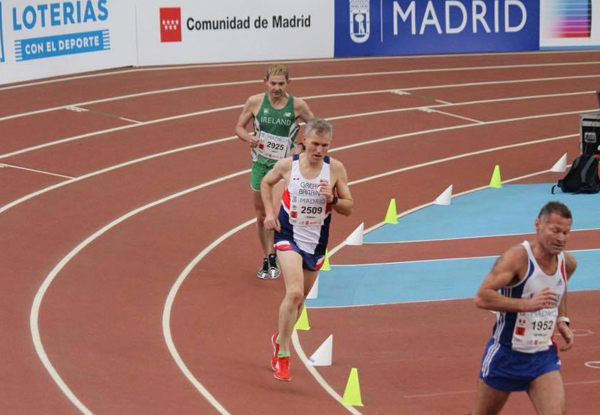 Well-known Scottish runner Chris Upson chose Madrid and the exotic surroundings of the 2018 European Masters and the 3,000m distance to record his 1,000th race. Chris, the man behind the Scottish Hill Racing website, has raced at distances from 800m indoor sprints to the gruelling 10-stage high altitude Everest Sky Race in Nepal over the course of the last 18 years.

More local to the Glasgow-based runner, Chris is a regular completer of the Bog and Burn midweek hill race series and the Tour of Clydeside, along with running 75 Parkruns.

Other achievements include Scottish national cross country M50 titles at 4km and 8km; 8 London Marathons, and World Masters Half Marathon in Lyon, France.

More recently Chris has completed 29 indoor and outdoor track races, with Scottish national medals at every distance from 800m to 10,000m.

Chris enjoyed competing at the European Masters 3000m in Madrid for his 1000th race, and was pleased to achieve one of his two targets of not finishing last and not getting lapped!

Chris was just one of a sizeable Scottish contingent in Madrid. Check great reports by Alan Ramage on a number of medal winning performances from the event at the Scottish Veteran Harriers Facebook page.