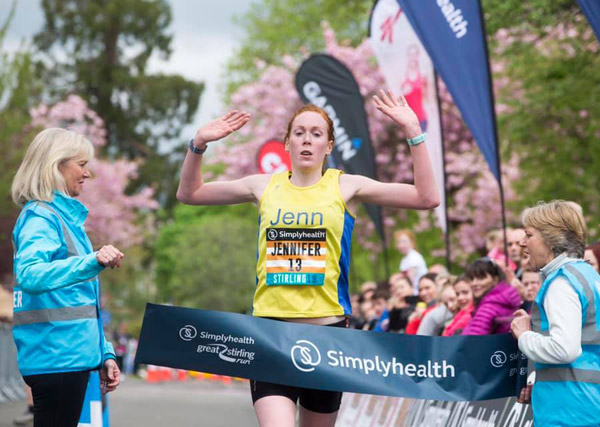 4,000 runners took part in Sunday's (28 April) Great Stirling Run in the marathon, half marathon and family run events. The feature marathon saw victories for Central AC pair Michael Wright and Jenn Wetton while Matthew Sutherland and Fiona Matheson claimed the top prizes in the half.

For Wright it was 'two-in-a-row' as he retained the Scottish Marathon title, stopping his watch on 2:29:32 just 13 seconds slower than last year. For Wetton it was a return to the race, which she had watched last year with her weeks-old baby, and an encouraging 2:56:06 plus a Scottish title. (Stirling Marathon doubled as the 2019 Scottish marathon championship race.)

Starting in the city centre near to the castle, runners made their way along the A84, passing Blair Drummond Safari Park en route to Doune. Crossing the Bridge of Teith, they continued through Doune and on to Dunblane before following the old A9 to Bridge of Allan then Stirling University. Just passed 21 miles the field headed south on the A91, returning to Stirling and the finish on King’s Park Road.

Post-race runners praised good event organisation, great support along the route and the efforts of the pacing team to get runners to their target times.

Marathon debutant Steve Herriman reckons the support got him to the finish line: "Thanks to all the roadside supporters for an amazing day - every single cheer, high five and offer of jelly babies got me round my first marathon!"

While Stephen Gorman promised to return in 2020 despite a challenging race finale: "The support on the course was exceptional. Wiill 100% be back next year, but can someone please change the route of that last mile. Just about kills you coming up that hill!"