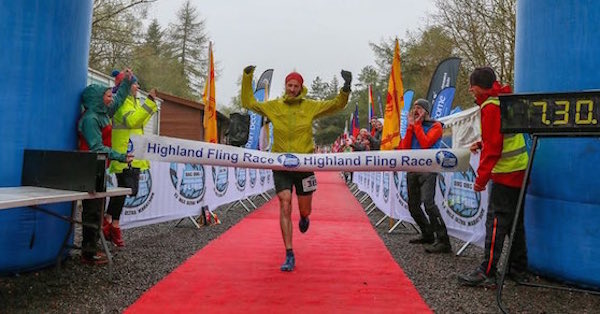 Few races can be as much loved by competitors and volunteers alike as the Highland Fling, whose 14th edition took place on Saturday (27 April).

The event started in 2006 as a low-key training run for the West Highland Way race. In that first year, fewer than 20 runners took part, but since then, it has grown substantially.

800 runners – from over 15 different countries, including Norway, Hungary, Canada, Estonia and the USA – were on Saturday’s start list, with the event also serving as the 2019 Scottish Ultra Trail Championships.

Sadly, atrocious weather meant that this year’s race posted the largest number of DNFs in its history, with only 647 completing the full 53 miles from Milngavie to Tyndrum.

For Kevin Stephen (Garioch Roadrunners), Saturday was his first time running the Fling, having served as one of the 200-odd volunteers needed to stage the event last year. He told runABC Scotland online: “The weather was unfortunately terrible this year. It belted it down from around an hour in for the next nine or so, going off not long after I finished.

“The lochside section was particularly lethal. I lost a shoe in a drainage canal, but at least I found it again!”

Other than the thought of a hot shower and a (free) cold beer at the end of it all, what else helped runners get through the downpours? “Someone put up a sign at 19 miles that just said ‘don’t be s***’. “This became my mantra for the next 34 miles!”

Stephen added: “The red carpet at the end makes you run and grin like a loon, too, even if you’ve spent the previous x miles miserable and plodding. The lentil soup’s legendary, as well … the organiser Johnny Fling’’s Mum’s work if I’m not mistaken.”

And the end did come, for most of those who started.

In what organisers called ‘the closest and most exciting finish in the 14 years of holding the event’, John Hammond (Carnethy) came home first in 7:30:29, sprinting down the red carpet.

Sam Humphrey (Victoria Park Harriers) finished second in 7:32:08 ‘looking near to collapse’, with Toby Chapman (Bournmouth AC) less than a minute behind in third.

In the women’s race, course record holder Beth Pascall pushed the male competitors every step of the way. She finished in 8:02:46 for her second win and a ninth-place finish overall.