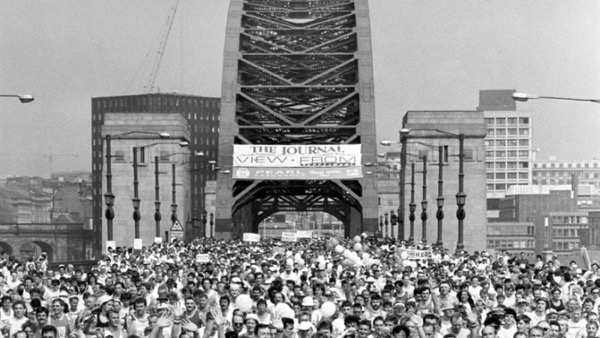 The Great North Run Foundation is set to receive a National Lottery Heritage Fund grant of £250,000, money that will go towards creating a feature length documentary of the event as it prepares to celebrate its 40th year in 2020. The film will focus on the social history of the North East over the last four decades and the changes the event has witnessed since it was first held.

The documentary will tell the story of the event through the voices of the people that have made the Great North Run what it is today. As well as the runners, volunteers and local spectators that support them around the course, the project will feature; the bands that play along the route, the small charities that wouldn't exist without funds raised, the Scout group that gives out the water bottles, the first aiders that provide comfort and care and many, many more.

These oral histories will be woven together with meticulously researched archive material sourced from the BBC, the North East Film Archive and through the National Lottery Heritage Fund project, ‘Search and Rescue', which aims to find the hidden footage.

The film will be broadcast nationally in 2020, presented at regional cinemas and heritage venues in the North East and distributed via regional and community screenings, alongside a children and young people's engagement programme.

Brendan Foster explains: “When we first started out, we could never have imagined where this journey would take us. 40 years is a very special milestone and we can't wait to celebrate with our runners, incredible volunteers, first rate spectators and the rest of the region.

“We know so many people have brilliant memories of the event. Wherever I go, people stop me to tell me about their own Great North Run experiences and what it means to them. It will be a privilege to capture some of these memories forever in this film and share them with the next generation.”

Contributions are still wanted for the documentary – if you have an experience you are willing to share you are invited to get in touch here.