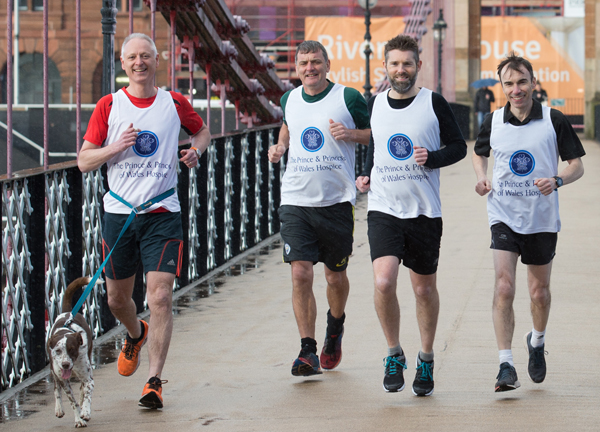 Hampden Sports Clinic physiotherapist Frank Gilroy is inviting runners to join him and his Cy-Run team on a 52-mile four-leg run based on the Five Ferries Challenge around the west of Scotland. Frank and the team are to run the route to raise money for The Prince & Princess of Wales Hospice.

The demanding test is scheduled for Friday 18 May and starts with the ferry from Ardrossan to Brodick, then a 14-mile run to Lochranza. There’s a brief rest on the journey to Clonaig, before the 10-mile stage to Tarbet.

After the ferry to Portavadie, leg three sees a gruelling 19-mile run to Colintraive followed by a ferry to Rhuboddach, and a final eight-mile run to Rothesay. The team will then enjoy a well-earned rest for their weary legs on the ferry back to Wemyss Bay. It should take about 12 hours with more than eight hours of that running.

The sports physio and his charity fundraising team of runners are taking on the epic Five Ferries Challenge to help bring their fundraising total for The Prince & Princess of Wales Hospice up to an impressive £125,000.

54-year-old Frank told runABC Scotland: “I’ve made record-breaking winning times in the Great Scottish Run and London Marathon, dressed as Harvey the hospice mascot, and the team has cycled from Glasgow to London.

"Now we have decided to finish in style by running the Five Ferries Challenge route. And we’re encouraging as many people as possible to join us on the way, either running the whole route or part of the way with us.”

Frank will be running with seven members of Cy-Run, among them Neil Robinson, Kenny Neison, Allan Kershaw and Andy Devine – as well as Pepper the dog. They started raising money for the hospice’s £21 million capital appeal to build a new home in Bellahouston Park more than five years ago. The team wanted to fund two treatment rooms for patients, with one named after Frank’s late wife Kathleen.

The new hospice, set in a 7.5-acre site in Bellahouston Park, will lead the way in palliative care, offering a gold standard of care and support to 1200 new patients and families every year in a purpose-built facility.

To make a donation to boost Frank’s fundraising, visit his Just Giving page.