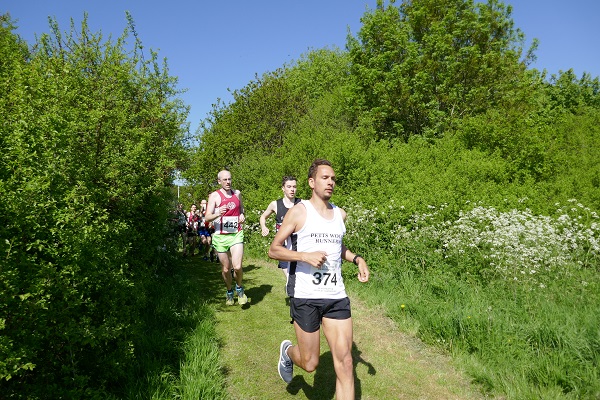 Occasionally a good training route makes a great race and that is certainly the case with the Ted Pepper Memorial 10K. The 40th anniversary edition of this traditional club run was held in glorious sunshine on Early May Bank Holiday Monday (7 May) from Norman Park, Bromley.

The original course was around seven miles and eyebrows were raised when it was changed to an accurate 10k in 1991 – such an odd distance would surely never catch on! A further change saw a move to a multi-terrain format in 2012 and the event now embraces all standards, with local beginners' groups choosing Ted Pepper 10K for their annual challenge.

Blackheath Harrier's Edward Pepper was 35 years old when he lost his bearings and died in the 1978 Three Peaks Race. He was the club's auditor and a regular member of Blackheath's successful men's team. His passing has been remembered through this race since 1979.

With the mercury nudging towards 30C, a field in excess of 400 made a cautious start on the whistle from race director, David Beadle. Early leader, Jon Kennedy (Dartford Harriers) was unable to shake off the pack and it was Spanish 2:37 marathoner Roger Viladell (Petts Wood, 35:35) who had the stamina to power through to win from defending champion, Ross Braden (Blackheath, 35:54) and Kennedy (36:11).

Perhaps the biggest cheer was reserved for the many members of Zero to Hero Runners who are based at Norman Park. Blackheath Harriers' club President Paul Byfield was at the finish line to shake the hand of many finishers, including Zero to Hero's Rowena Davies and Laura Reeves (1:58:21) who concluded the event to a tremendous ovation.