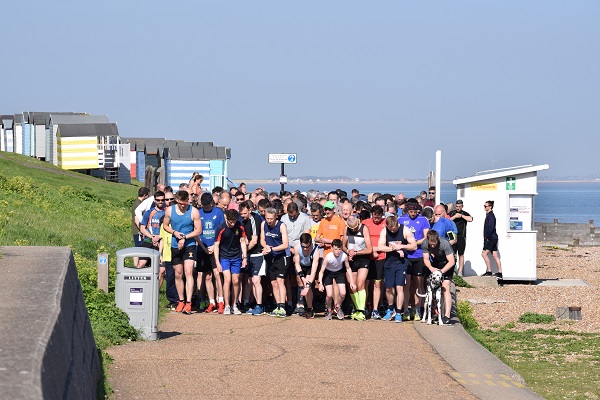 Running For Free Beside The Sea

A recent feature on coastal parkruns reminded runABC South correspondent Alan Newman of his parkrun debut at Whitstable on the North Kent coast seven years ago. On Saturday (5 May) he scratched that seven year itch by returning to his parkrun roots to relive the joys of running for free beside the sea.

Whitstable parkrun was the inaugural event in Kent, starting on 6 November 2010 with 70 runners. The first run saw David Gentle (19:26) and Jennifer Benson (21:20) first round the two-lap course that finishes on the manicured clifftop lawns of Tankerton Slopes.

Whitstable will celebrate its 400th event on 12 May and the participation record stands at 375, although it was a slow burner and it took 29 runs to top 100 participants and 181 events were completed before position 200 was recorded. The record was reached in August last year and the organisers are hoping for that to be beaten on Saturday.

Run #47 stands out in my memory as it was the one where I was first finisher – a rare but pleasing feeling. A new parkrun nearer home soon became my local and my record showed just five visits to Whitstable. It was time to return as there can be few better courses in the UK, with far reaching views across Thames Estuary towards Southend and brightly coloured beach huts that seem to flash by even at my pace as they are so tiny.

Whitstable parkrun runs smoother than Mrs runABC South's well oiled sewing machine with fully functioning public toilets at the start – a big tick – a friendly welcome to all, free parking, kilometre markers and something the organisers coyly dub a 'personal fitness indicator' that looks rather like a clock!

The course starts right beside the beach and finishes on top of Tankerton Slopes, so is net uphill. In the seven years since my last visit it has suffered from global warming that has caused the course to expand and the 'undulations' to become hills. Hence my time was 90 seconds slower – there can be no other logical explanation!

After the run I enjoyed a warm down with an old sparring partner, Mick Ellsmore, veteran of 235 parkruns (132 at Whitstable). When asked to explain the attraction he merely waved an arm towards the sea with its pleasure craft, oyster beds and ancient shingle strip known as The Street that extends half a mile into the sea. This man of few words spoke volumes with a simple gesture but he did add: “It's a combination of the views, challenging course, lovely people that put it on and it just somehow feels right. I will always come back to Whitstable”.