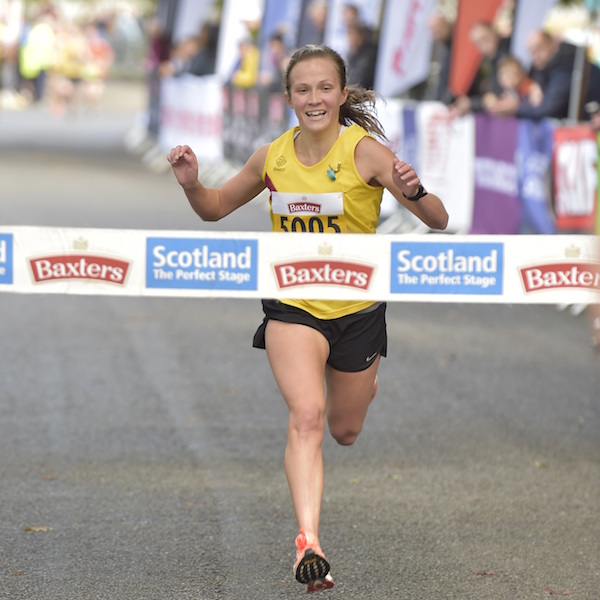 Scotland international Jenny Bannerman is urging runners thinking about entering the Baxters River Ness 5K or 10K on Sunday, 6 October to sign up before entries close this Tuesday (24 September).

Bannerman has been a regular competitor in the Baxters River Ness 10K over the past decade and she’s keen for others to experience the vibrant atmosphere and enthusiastic support which propels so many people to fast times in one of the country’s most popular races.

The Inverness Harrier first ran the 10K in 2009 and has been back for each of the past five years, winning three times and never finishing lower than fifth. In 2018 she set what was then her fastest time of 34min 53secs.

There’s little doubt it’s one of her favourite races. As she explained: “It’s held at a good time of year, coming at the end of the summer when the weather is cooler and people have had plenty of time to train in decent conditions.

“It’s also a good course. Although it’s a net downhill, the first third of the route is quite tough as it’s gradually uphill. That’s not such a bad thing as it makes sure you don’t set off too fast. The second third is a nice downhill and the final third is relatively flat. So it’s perfect for elite runners looking for quick times and it’s also ideal for people doing their first 10K.

“There’s no doubt there’s a fantastic atmosphere at the race and it is very well organised. Of all the big 10ks I have done throughout the country, this one is up with the best of them.”

The variety of races at the Baxters Festival of Running appeals to Bannerman too. “I like the fact that there’s races for all members of the family starting with the Wee Nessie for kids.

“There’s a 5K as well and for some people that can be a stepping stone towards perhaps doing the 10K in the future and maybe even the marathon after that.”

Race director Malcolm Sutherland added: “We’re delighted to see top local runners such as Jenny Bannerman supporting our event year after year, but we welcome runners of all levels from across the world. We can guarantee they will all receive a special Highland welcome whether they are at the front, middle or back of the pack.”

Full entry and event details can be found at www.lochnessmarathon.com.