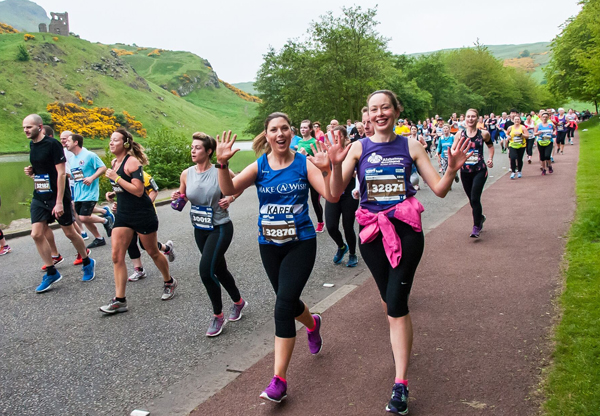 Edinburgh Marathon Festival 2018 is just 24 hours away and thousands of participants are getting ready for Scotland's biggest running event of the year. The fun starts at 9.00am tomorrow (Saturday 26 May) with the 10K at Holyrood Park. The 5k is scheduled for 11.00am and is followed by the four junior races (5k, 2k, 1.5k and 1k) which cater for 3 to 18-year olds.

The main action comes on Sunday with an early start for the half marathon (8.00 am) the curtain-raiser for the feature marathon event where the hooter will blast at 10.00am to set the field on their way. Runners will progress around the centre of Edinburgh (the Mound, Princes Street Gardens, the Royal Mile and Holyrood) before heading down Portobello Road to the shore and and 'out and back' along the East Lothian coast.

The BBC weather forecast for Sunday predicts 'sunny intervals and breezy' with temperatures at 15° (10.00am) and rising to 17° by 1.00pm. Given those long coastal stretches runners should expect wind to be a factor. Whether that is cooling breezes or hindering gusts will be revealed on the day.

Among the thousands hoping for favourable breezes are actor Sam Heughan, who will complete a Scottish spring marathon double after completing 26.2 miles at Stirling just four weeks ago. The Outlander star finished in a very respectable 3:13:37 in that first race and has been working with coach Neil McNicol so hoping to match that performance.

Sam Heughan will be joined on the start line by celebrity chef Tom Kitchen, who is running on behalf of the Citadel Youth Centre and has already raised £7,000 (and still climbing).

However the colourful Carl Hardman will be missing on Sunday from the men's marathon race. The Salford Harrier who ran 2:19;35 at Berlin last autumn had an accident in training and won't risk running when less then 100%. Hardman's withdrawal leaves opportunities for Bedford AC's James Bellward and Phil Martin of Peterborough AC.

In the women's race one of the favourites is Shona McIntosh of Hunters Bog Trotters who set an impressive 2:45:09 time at the ASICS Greater Manchester Marathon in April. Shona is likely to be challenged by Tracy Millmore of Birtley AC who ran 2:46:09 at the Plusnet Yorkshire Marathon last October.

The Half Marathon should also make for interesting viewing with last year’s female winner, Avril Mason of Shettleston Harriers, coming back to defend her title. She will be pushed all the way by local favourite Dianne Lauder who finished third in the marathon last year.

In the men’s half marathon race, last year’s second place finisher Patryk Gierjatowicz is looking to make it one better along a new route. He will face fierce competition from Spaniard Severino Felipe Gomez and Sam Stead of Keswick AC, who clocked an impressive 68:29 at the Brass Monkey Half Marathon back in January.