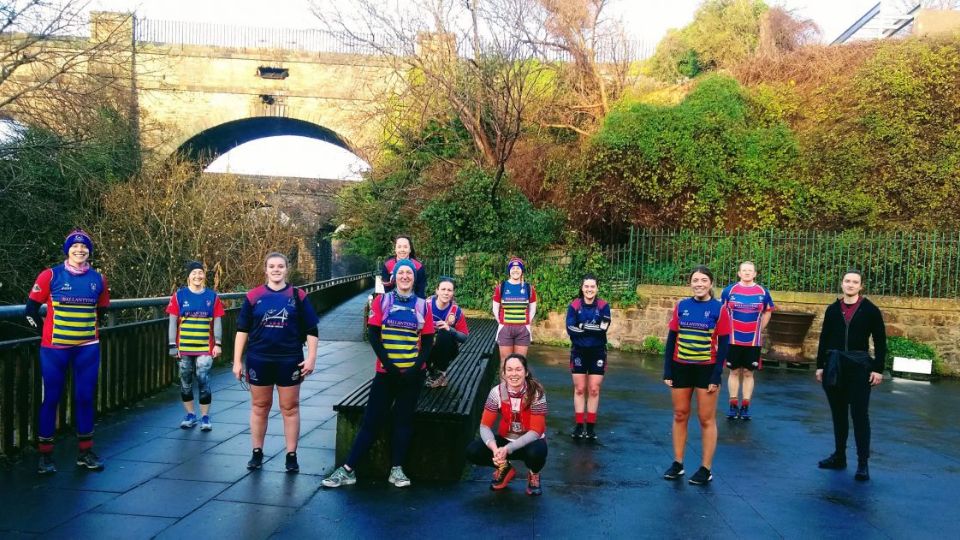 An avid runner and rugby player has just completed an 18-mile run linking each of the seven rugby clubs offering the women’s game in the capital. Ruth Morgan, who plays for Broughton Women, was joined on Sunday by some of her own teammates and players from Edinburgh’s other women’s clubs – Lismore Ladies, Liberton, Watsonians, Corstorphine Cougars, Edinburgh University and Heriot’s Blues Women – for parts of the run.

Morgan said: “I plotted the route and 18 miles seemed like the perfect sort of challenge. I was overwhelmed by the enthusiasm shown by all the teams to get involved. Nobody told me it was mad, though some may have thought it!”

Morgan’s intention in organising the run was to raise awareness of women’s rugby. She said, “We want to promote the sport of women’s rugby in general, but also showcase what Edinburgh has to offer if people are thinking of trying rugby or they’re looking for a good sport to watch on a Sunday afternoon.”

The clubs involved were very proud to see their players lace up their trainers rather than their spikes for a change. Watsonian Women's Rugby tweeted: "Delighted this event went well and to see a number of @watsonianwrugby players involved. Well done to Ruth Morgan for organising it!"

Like runners, rugby players have had to make the most of a training and competition year disrupted by coronavirus restrictions. With the rugby season – and most running races called off this year – Watson herself was dealt a double sporting blow.

But despite all the disappointments of 2020, Watson can still focus on the positives. She said, “The team has been amazing. Throughout lockdown we continued with twice weekly training on Zoom with different team members leading the sessions, we had everything from Pilates and dance, to burpee and running challenges. It kept everyone motivated and team spirit has been high.”