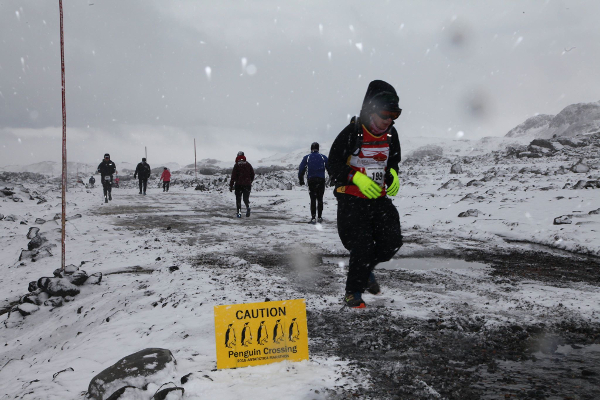 “Through endurance we conquer...” These words used by Ernest Shackleton to describe Antarctica can be applied to Redditch's Doug Richards who achieved a lifetime goal on the South Pole continent.

The 69-year old author of ‘Running Hot and Cold’ set himself the target of running at least a half marathon on all seven continents with the Antarctica race his final in the series. The Antarctica Marathon and Half Marathon were held on King George Island off the main coast and in extreme weather conditions.

On 16 March, Doug Richards was amongst 83 runners who started the half marathon at 9am. They were greeted with a blizzard, icy winds and sub-zero temperatures as they followed a hilly route that changes each year due to the weather and logistics. Doug finished in 3:00:15 and came 35th out of 83 runners in conditions that would discourage even the hardiest of athletes. He was presented with an Antarctica Marathon and Half Marathon medal along with a Seven Continents finisher’s medal.

Antarctica was a dream come true for Doug who along with the others had opportunities to explore the island and the Peninsula before and after the race. They visited numerous bays and fjords, seal colonies and research bases and went kayaking with whales. In his words: “it was such a privilege to be there....Antarctica is a beautiful place, pure and unspoilt.”

What next for Doug? He will be celebrating his 70th birthday in May followed by Venice Marathon in October which he will be running with his son Chris.