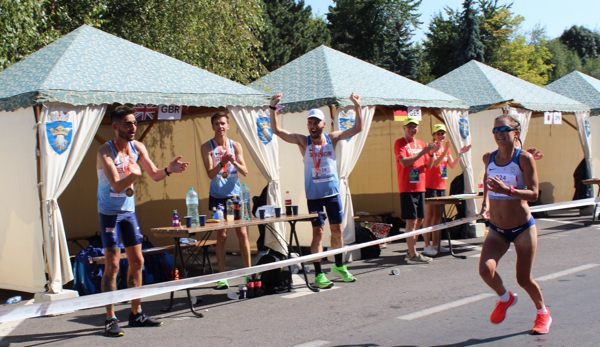 After her performance at the 50K World Championships on Sunday (1 September), at which she not only took first place in her ultra debut but set both a world and British record, Aly Dixon might face the very serious question that she had already changed into her Wonder Woman costume in Romania.

Dixon has her sights on breaking the Guinness World Record for the fastest superhero to run a half marathon at the upcoming Great North Run.

However, Dixon assumed super hero status a week early by putting in a stunning performance at the IAU 50K race in Brasov, Romania. On her ultra debut, the Sunderland Stroller crossed the line first in 3:07:20, breaking a longstanding record by Frith Van de Merwe.

There were several other strong showings from fellow GB runners with Helen Davies finishing second behind Dixon in 3:09:16, while Julie Briscoe took ninth in 3:22:57 and Hannah Oldroyd (3:26:00) grabbing 12th. In the men’s competition, Dan Nash took third in 2:49:01.

Prior to the event, Dixon had been altitude training and her preparation clearly paid dividends, as she comments: “I’m really pleased with how it went. The 50km is something I’ve had my eye on for a while as I thought I could break the British record."

She continued: “I knew I was in good shape so I went for it and to come away with the win and world record is amazing. I can retire from ultras now and go back to the marathon!”

Before returning to the 26.2 mile stage, Dixon has another world record in her sights at the Great North Run this Sunday (8 September), you can read more about her attempt here.