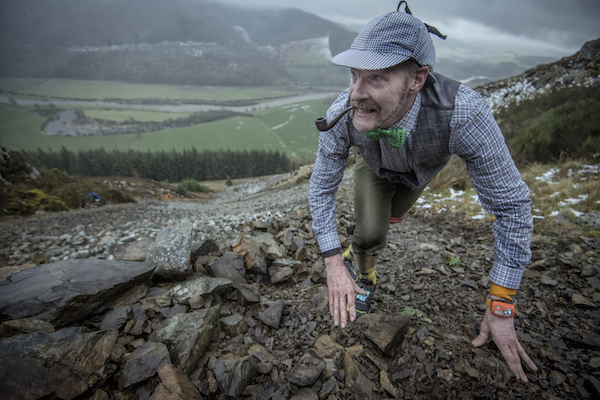 Tweeds and pipes, fashionably accessorised with waterproof shoes and headtorches, was the dress code at Saturday’s Mighty Deerstalker, held at Traquhair House in the Borders.

It was a welcome return for the event, the UK’s biggest night race, after it was called off last year because of bad weather.

In addition to the Standard and Half Stalker, whose routes and actual distances were a closely guarded secret, runners could also take on the inaugural ‘bonkers’ Double Stalker: two laps of the standard ‘Stalker’ course, the second of which was in the dark.

79 runners – only eight of them female – took up the new challenge. Nearly all of them – 76 – finished, including all eight women. Provisional results give the winner, Martin Jones, a time of just over three hours.

Feedback from the exhausted runners after the race was very positive. One told us their route had some 'of the most brutal miles' they’d ever done, 'but some of the best'!

Another of the 1500-odd finishers across all three events added: "This was a crazy tough course of never ending steep hills, wading through freezing rivers and pretty much a vertical scree slope. It is an amazing night run with great atmosphere.

"I have to say these Rat Race events are so well organised. They think of everything and make sure you're well looked after. I highly recommend this event. It’s a real test of endurance and mental capacity."

The Full Stalker was won by James Dunn; first lady was Emma Mcgilp, who was also fourth overall.

There were good results for women in the Half Stalker, too. First lady Zoe Murray was second overall to the winner, Richard Hazell.

Rob Atkinson, Head of Events at Rat Race Adventure Sports, told runABC Scotland online: "Well done to everyone who took on the challenge of The Mighty Deerstalker. There's not many folk that would be so brave as to tackle the cold muddy waters, the dark tunnels and the epic scree scramble in the pitch black of a very chilly March night!

“This is an incredible run delivered very safely in challenging conditions. We look forward to welcoming back all our Rat Racers to the Scottish Borders next year."