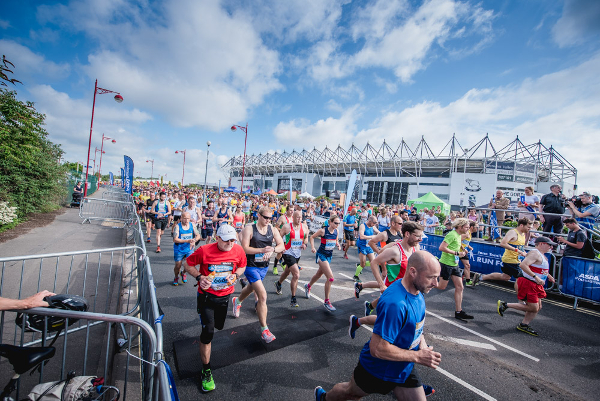 The Asda Foundation Derby Half Marathon (Sunday 3 June) hit the ground running as thousands soaked up the atmosphere and heat. They were paced, serenaded, cheered and applauded on their way around the home of the Rams.

A new signing for organisers Run For All, this hugely popular race formerly known as The Ramathon attracted entrants of all ages and abilities, many of whom raised thousands for charities. Some were running for a charity of their own choice, others took part on behalf of the event’s five charity partners.

Derby County’s Pride Park Stadium acted as the start and finish for a well organised event with helpful marshals and volunteers who endeavoured to keep everyone cool in sweltering conditions. St John’s Ambulance was kept busy going to the assistance of stricken runners in temperatures that reached 28 degrees. Their stellar efforts have been widely praised on social media.

Shelton Striders team of pacers helped many to reach their target time despite the heat. And if further encouragement was needed, the Derby Hospital band and Derby Serenaders provided musical motivation along with cowbells, kazoos and whistles from the Canaan Trust.

Pre-sale entries have opened for the 2019 Asda Foundation Derby Half Marathon. Visit the Run For All website for more information.