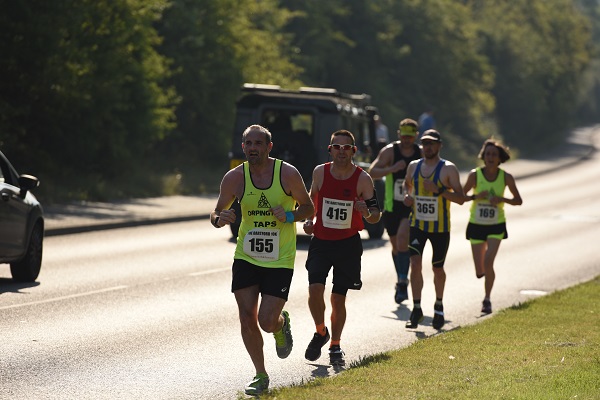 The previous best times on this undulating course were set in the inaugural event by Alex Money (Orpington Road Runners, 34:21) and Anoushka Johnson (Dartford Harriers, 43:14). That was about to change as the runners left the shade and sanctuary of Dartford Football Club at Princes Park for the 9:00am start.

It was not long before Charlotte Bates (Maidstone Harriers, 42:47) had also arrived back at Princes Park to trim the women's mark by 27 seconds, followed by the former record holder Anoushka Johnson (W45 Central Park Athletics, 44:13) and Jill Phillips (W45 Orpington Road Runners, 44:55).

There were more than 50 runners inside 45 minutes, including Richard 'Taps' Tapsfield (Orpington Road Runners, 44:50) who is pictured leading a group through the Kent countryside on a bright and very hot morning.

John Cook, who finished just outside the hour, summed up the event on Facebook: “Massive thanks to all the organisers, marshals, medics, runners and the ice cream man for a top event today. Really enjoyed it”.

It looks like Kent has a new classic and the Dartford 10K is set to run and run.