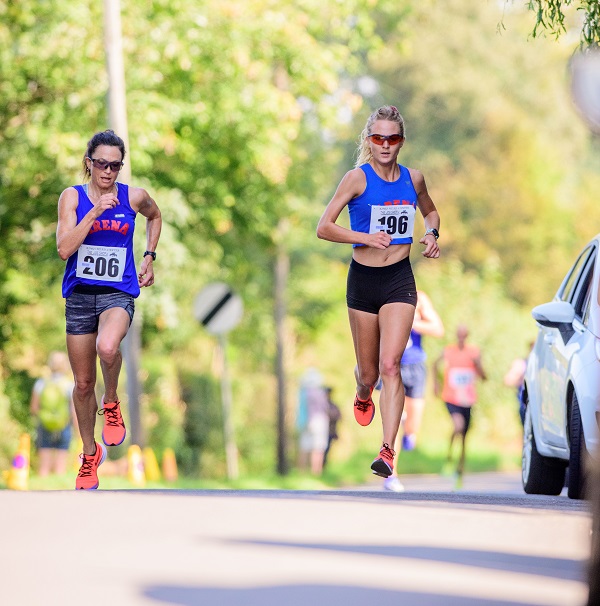 The 22nd Kings Head Canter 5K on a sweltering Bank Holiday Monday (26 August) was full of drama. Highlights included a men's course record and a dead heat in the women's race as the normally unflappable race director for the last 14 years was faced with a new results system that obstinately refused to work as anticipated.

Stuart Mills was the man in charge once again for this 4,980m dash between the East Sussex villages of Chiddingly and East Hoathly. Pen and paper had sufficed to produce results in a timely fashion since 1998 but the demand for ever faster presentations resulted in the introduction of new technology that had been thoroughly bench tested but went 'on the blink' at just the wrong moment!

Fortunately, full results were produced later and runABC South can share the story of a phenomenal race on the hottest August Bank Holiday on record, with 33.3C reached at Heathrow in the afternoon. And just 14 minutes 58 seconds after he started, Kevin Moore (Brighton &Hove) had erased Finn McNally's 2017 course record of 15:06.

The pace was as hot as the temperature was on the roads, with M40 Ian Leitch (Brighton Phoenix, 15:05) also inside the old record and Maxwell Dumbell (Horsham Blue Star Harriers, 15:28) not far away in third.

The crowd outside the Kings Head public house – serving thirsty travellers since 1648 – had barely absorbed the news of the new course record when the women's race leaders came into view. In a rare outcome, Arena 80 team mates Caroline Hoyte – the course record holder with 17:10 in 2002 – and Maisie Trafford shared first place in 18:03.

This was no staged joint effort, as our picture courtesy Jim Holden shows. Hoyte (W45) and Trafford had fought all the way before calling a truce at the finish line, where they simply could not be separated as they crossed holding hands. Third place went to another Arena 80 W45, Tara Shanahan (18:53) in a time that would have won seven of the previous races.

The delayed results simply allowed more time in the sun to enjoy the post race BBQ and free pint of well-executed ale from the 1648 Brewing Company, handily positioned beside the pub in the Old Stables and village forge.