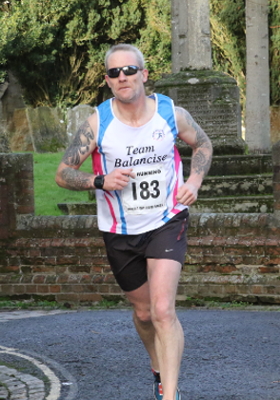 A near fatal car accident didn’t stop Darren Gibson from running in the 18th Stanwick 10K (Monday 22 April) as he made a remarkable comeback in a highly competitive race.

The 6ft 3, 48-year old member of Team Balancise RC showed the power of the human spirit to overcome life threatening injuries with a gutsy performance in this popular 10K. A resident of Stanwick (Northamptonshire) Darren Gibson had been a competitive runner for many years before deciding upon a new challenge, that of Ironman triathlons. His single-minded approach paid off with a string of successes until one evening in June 2018, he was struck from behind by a car travelling at 60 mph while out on a training ride.

Darren suffered multiple fractures including his shoulder, back and pelvis and spent several weeks in hospital with an uncertain future ahead of him. His mobility was affected to the extent that walking was difficult and running was out of the question.

Darren had other ideas and embarked on a training programme with the goal of achieving as near to the level of fitness he had before his accident. His journey started in September 2018 and ended on a high note as he crossed the line in 47:10 and was 105th overall out of 349 finishers. He was also the 1st Stanwick male finisher.

The Stanwick Races Group organises this annual Easter 10K and 2K that raises funds for local causes including the scouts, village hall, children’s clubs etc. They have acquired a reputation as a top events team that attracts runners from across the UK and overseas.