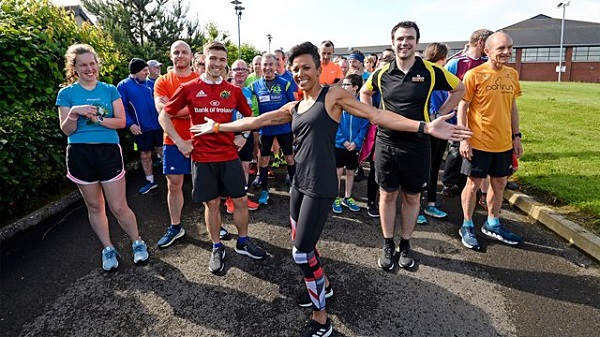 Dame Kelly Holmes is the presenter of an inspiring, uplifting documentary to be screened on BBC One tonight (15 July) at 7:30pm, exploring the exponential growth of parkrun and the mental health benefits of running.

The double Olympic gold medallist from Hildenborough is a serial parkrun tourist and one of the project's most recognisable ambassadors. Kelly reached her zenith in Athens 2004 when she ran two perfect races to claim Olympic gold medals at 800m and 1500m after being repeatedly knocked off track by illness and injury.

We now know the former Army sergeant also fought mental health issues for many years, including bouts of self-harm, anxiety and depression, and she has been incredibly honest and open about her personal battles on and off the track.

Dame Kelly's passion for parkrun has led her to more than 20 venues to date and she has a PB of 17:48 set at Hastings in August last year. To have one of Britain's finest ever athletes turn up at any parkrun is a big deal but tonight's BBC programme, part of Our Lives series, is different as the film follows the launch of a new event – Holy Cross College at Strabane in Northern Ireland on 15 June – and Dame Kelly is thoroughly involved as starter and volunteer bar code scanner at Ormeau in Belfast and female first finisher at Strabane!

The film gets beneath the skin of the parkrun phenomenon, with nearly 250,000 people getting active every Saturday morning, and explores the wider health and well-being aspects, the sense of community and volunteering as well as following two people who are hoping to use the new event to start their own fitness journeys, with support from Dame Kelly.

This is one programme not to miss so clear the decks and settle down for 30 minutes, record it for later or catch up on iPlayer.