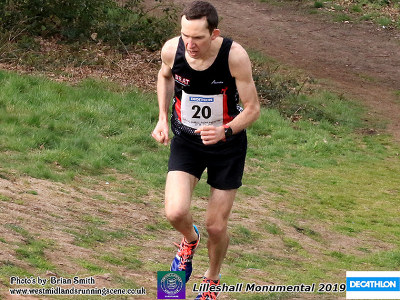 For Christopher Ashford and others it was a case of head up and keep climbing at the Lilleshall Monumental 10K (Sunday 31 March). The views of Shropshire were worth the effort and pain...

This family-friendly event included a fun run, then a tots and toddlers race followed by the 10K at 11.30am. Over 270 runners took part in the 10th anniversary of the event near Newport, Shropshire. This off-road race went through the scenic village of Lilleshall using paths, woodlands, fields and tracks, passing the 11th century church before the towering ascent.

The 70ft monument awaited the runners as they made their way up to the top of Lilleshall Hill. Once there they were treated to stunning views of the surrounding countryside before descending back to the village and the finish at Lilleshall School.

Former national and international triathlete Christopher Ashford won the 10K in 35:39. A member of BRAT, he is talented across all distances ranging from 5k to marathon and a regular at Cannon Hill parkrun. James Eccleston was second in 35:54 followed by Joe Phillips of Newport & District RC in 36:48.

Kelly Butler followed up her Stafford Half Marathon win with victory in the women’s race, finishing in 42:52. Sally Walker was second in 44:39 and Sophie Rose Laverie of Newport & District RC third in 45:43.

There were age category prizes and goody bags for all finishers and a complimentary massage from Stafford Physios. A BBQ hosted by the local scouts contributed to the village fair atmosphere.

All proceeds from the 10K are reinvested in the local community with donations from the fun run going to Alzheimer’s Research UK.