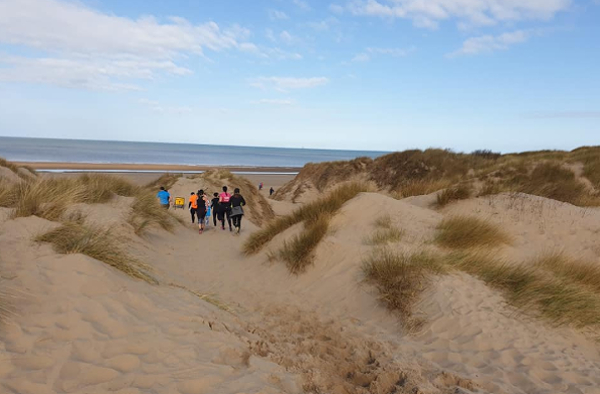 This latest offering from Time2Run Events, the Tiger Beetle 10K was held at Ainsdale Sands National Nature Reserve, Merseyside. It was named after the striped predatory insect that lives in coastal areas in the North West such as Ainsdale.

Runners started in three waves – 10am, 11.30am and 13.00pm followed by the Canicross entrants at 2pm. They followed an unusual and undulating route on winding trails through the woods then through the sand dunes and onto the beach. The soft terrain proved to be popular with the dogs as well as their owners. The route switched again to trails and continued so to the finish.

In Wave 1, Francois Rafferty of Southport Waterloo AC was first across the line in 37:57. Helen Sahgal of Liverpool Pembroke & Sefton Harriers & AC was the first female in 41:41.

In Wave 2, Sebastian Marczycki of Vegan Runners UK was the winner in 45:08. Olivia Wiggans of Red Rose Road Runners was the winning lady in 47:36.

In Wave 3, Mariusz Kovacs of Preston Harriers was first home in 42:20. Melanie Barber was the fastest female in 44:57.

Helene Pettitt and her canine companion won the Canicross wave in 45:47.

The Tiger Beetle medal was voted a winner by the finishers as was the choice of t-shirt colours. There were free photo downloads thanks to Mick Hall.