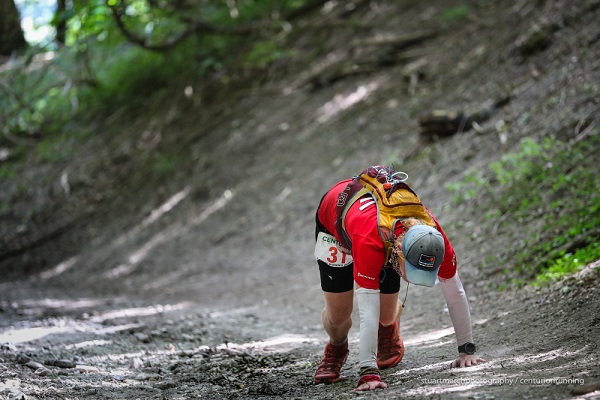 There were records broken before the starter's klaxon was even sounded in the eighth North Downs Way 100 on Saturday (4 August). The highest ever temperatures were noted but that did not deter the largest starting field of 238 runners – including a best women's entry of 42 – from tackling the 103 miles from Farnham, Surrey to the Julie Rose Stadium at Ashford, Kent.

The early stages of the men's race saw defending champion, Norbert Mihalik from Hungary, well inside course record pace – 12 minutes up on Ed Catmur's celebrated 15:44:39 in 2013 as he raced through Box Hill in exactly three hours.

However, this was not a day for heroics and Mihalik's lead evaporated shortly after the 50-mile checkpoint at Knockholt Pound. Paul Russhard was next to show his hand and looked strong until he was passed at Hollingbourne with around 15 miles to go by eventual winner Matthew Dickinson, who ran sub-two hours for the final 13 miles for victory in 17:21:22 in his maiden 100-miler.

The women's race followed a similar pattern as a determined pack chased defending champion, W40 Mari Mauland. At halfway, Mauland led by eight minutes from Laura Swanton and Ingrid Lid (pictured below). An exciting battle then unfolded as Lid took up the pace at 100km and held off a late challenge from the holder to triumph in her debut 100 miler (19:38:37) from Mauland (19:48:06) and Swanton (21:08:22).

Patricia Keene broke the W60 record (28:57:35) as 151 completed the course inside 30 hours, representing a finish rate of 63% – another record. Race organisers Centurion Running paid tribute to the army of volunteers who made the event what it was. The provision of countless extra litres of water, bags of ice, ice lollies, fresh fruit, coke and everything else runners could need literally enabled many to make the finish line, when otherwise they would have failed.

Race details and results are available on the runABC South race listings page.