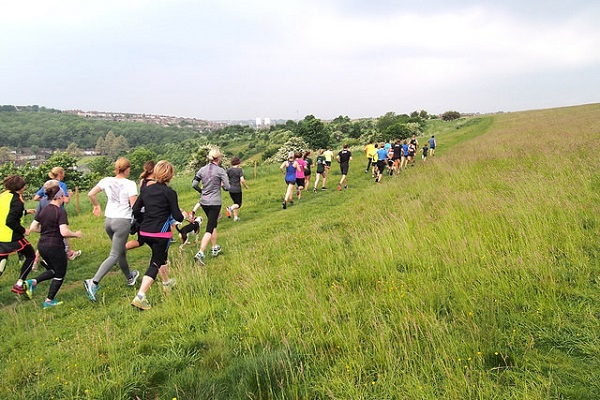 Why you should run one of the hilliest parkruns in Britain

Bevendean Down, Brighton is one of Britain's smallest and hilliest parkruns. According to the official stats it ranks as the sixth hilliest parkrun in UK, with 411 feet of climbing and a profile that resembles a Bactrian camel's back!

The attractions of lumpy parkruns have recently been explored in parkrun's UK newsletter and Bevendean Down was given pride of place as the lead story. We decided to take a closer look at the tiny but testing event that typically has around 35 runners with an average run time of 29:27.

Bevendean Down is a hidden gem with a rich bio-diversity and Local Nature Reserve status, situated within the South Downs National Park. The two-lap, clockwise course traces the perimeter of the sloping hills and affords spectacular views across the Downs towards Brighton Racecourse, the city and out to sea towards the Isle of Wight on a clear day.

A rewarding and inspiring run, then. Despite the tough climbs the course records are still impressive. James Baker (M40, Chichester) ran 16:30 in September and Tara Shanahan (W45, Arena 80) has just improved her own best to 20:55 on Saturday (4 August). However, we have to go back exactly two years to find the age-graded best, set by John Lowden (Brighton & Hove) at 83.22% for 19:16 when aged 60.

Paul wrote: “It’s all about the community and this ones got a cracking one. It’s an absolute gem of a parkrun, a small, tough and friendly trail run. I’ll take that over a fast, flat promenade run any day of the week. Once everyone had finished the equipment was packed away and most headed back to the pub for refreshments and conversation.”

The pub in question is The Bevy, just a three minute walk from the start/finish. The Bevy is the UK's first community-owned estate pub, opened in December 2014 funded by over 700 local shareholders. Post parkrun treats include a full range of cooked breakfasts, free iced water and, if you must, beer and the full range of licensed premises offerings!

Finally, the five parkruns deemed to be hillier than Bevendean Down with ascent in feet are: Whinlatter Forest, Cumbria (674), Lanhydrock, Cornwall (453), Wepre, Deeside (449), Mount Edgecumbe, Cornwall (438) and Drumchapel, Glasgow (424). Now there's a challenge for any parkrun tourists with crampons!