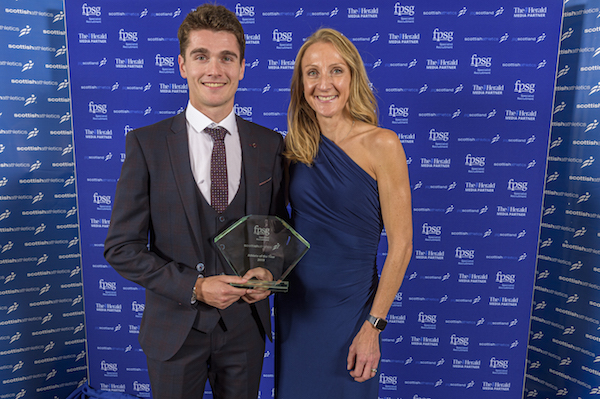 Marathon ace Callum Hawkins saw off the challenge of 2018 winner Laura Muir and four other short-listed candidates to win the scottishathletics’ FPSG Athlete of the Year award on Saturday night.

Clubs, coaches, officials and volunteers were also recognised and acknowledged, as Guest of Honour Paula Radcliffe helped make the presentations at a sold-out FPSG Awards Dinner in Glasgow.

Earlier this year Hawkins broke the Scottish record in the men’s race at the London Marathon; last month he finished fourth in Doha at the IAAF World Championships.

Hawkins told scottishathletics: "I’m thrilled to win the FPSG Athlete of the Year award given the competition this year. There have been Scottish records broken on the track and the two hill guys, Jacob Adkin and Andy Douglas, have performed superbly, too.

"It is quite exciting to see some progress in the marathon rankings for 2019 by Scottish athletes and hopefully we can add to that over the next couple of years."

But the Kilbarchan athlete's award wasn’t the only prize for the Hawkins family on the night.

Callum’s father – and coach – Robert Hawkins was named FPSG Performance Coach of the Year for the second time. Other well-known names also received accolades at the dinner.

Jake Wightman won the George Dallas Memorial Trophy, traditionally awarded to those who have achieved distinction in, or made a material contribution to, cross country, road running, track and field or hill running in Scotland in the preceding calendar year.

For a full list of all the categories and winners, see scottishathletics.