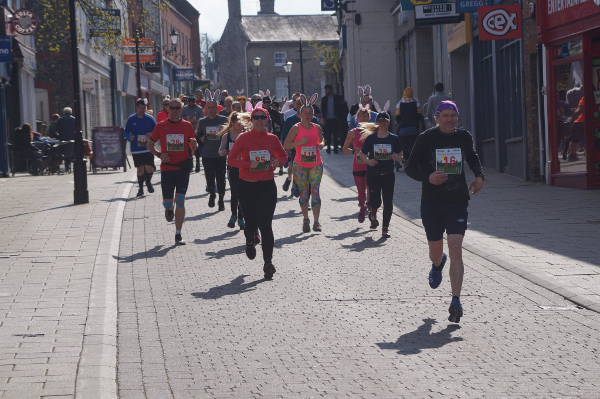 Sunday’s (14 April) Thetford 5K Easter Bunny Run was a sell out success from start to finish plus competition was fierce for the fancy dress title as well as the main running event.

Heidi De’Sousa led an energetic warm-up in which the Mayor of Thetford, Councillor Roy Brame joined in as runners got ready to scamper their way around the course. There were a variety of Easter costumes on display including bunnies, chickens and chicks and even a hard boiled egg! Bananas in Pyjamas made an appearance too.

Blue skies and sunshine formed a backdrop to this sold out themed event from Run Breckland that started and finished at the Guildhall. The Mayor of Thetford was the official starter and at 10am, sent the runners on their way with a shout of encouragement. Enthusiastic volunteers, many of whom entered into the spirit of the occasion by wearing bunny ears, clapped and cheered everyone as they ran past.

They followed a route around this historic town, passing King’s House, the Priory, Abbey Meadows, Coffee Mill Sluice and Castle Park before heading back towards the Guildhall.

Thetford’s Mayor handed out medals to the runners as they crossed the line, assisted by the Mayoress Karen Brame. There were prizes for the best fancy dress and free hot cross buns for everyone.

The proceeds from the 5K and the raffle raised over £600 were donated to the Mayor of Thetford’s Charity Fund that supports a variety of charitable organisations.