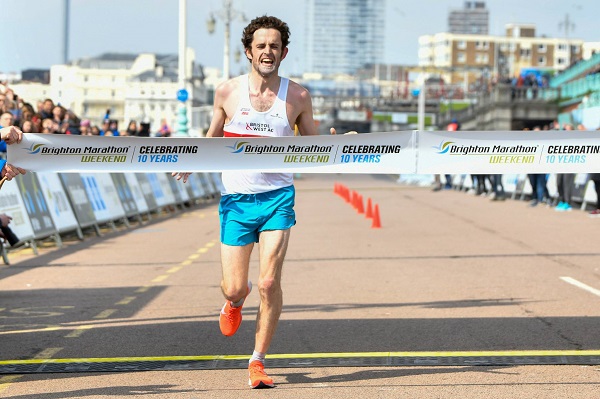 Davies was on a hat trick as the 2017 and 2018 champion but she handled the weight of expectation with ease to record her fastest time to date on the Sussex seafront course. Her 2:34:11 clipped three seconds off her 2012 previous best set at London Marathon and was an impressive four and a half minutes faster than her winning Brighton time last year.

runABC South reporter Alan Newman predicted a breakthrough performance for Jill Collett (Datchet Dashers) and she delivered with consistent splits for 2:48:14 in second place, under pressure throughout from Johanna O'Regan (Riverside, 2:49:38). The top three were all W35 masters, showing the benefit of experience at the longer distances.

Our crystal ball gazing extended to predicting three of the top six finishers in the men's race. Peter Le Grice went under the radar of our event preview but he destroyed his PB with a £1,000 bonus earning 2:16:22; racing 26.2 miles almost five minutes faster than ever before.

Despite understandably running low on gas in the closing stages he still had enough in the tank to stay ahead of 2016 UK 100K champion Paul Navesey (Crawley, 2:18:16 PB) and local crowd favourite Ian Leitch (M40 Brighton & Hove, 2:18:33 PB).

On a perfect day for fast times more than 100 runners were able to add a prestigious sub-three hour marathon to their personal records.