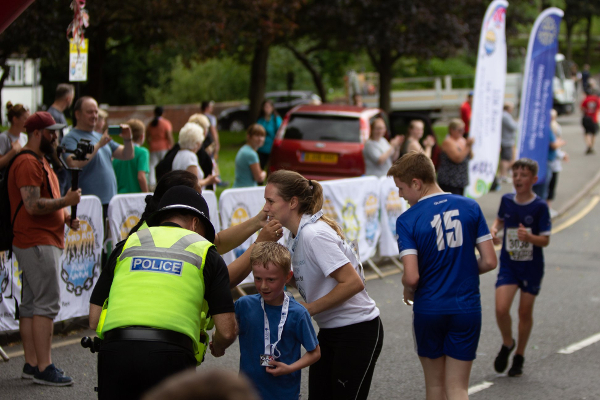 Halesowen was a shining example of the ‘Big Society’ as the community turned out in force for the Black Country Road Run (Sunday 30 June). The police and fire brigade lent their support too, handing out medals at the finish.

Now in its 8th year, the Black Country Road Run was hosted by Halesowen and Rowley Regis Rotary Club and part of the month long Black Country Festival. Spectators lined the route to cheer adults and children as they ran on a traffic-free course around this market town in the West Midlands.

The event included a 10K, Family Fun Run (5K) and a Corporate Challenge and attracted 1200 entrants in total, many of whom were running for charity. Joining them was ‘Blind Dave’ Heeley who along with two friends were dressed in superhero costumes and Mayor of the West Midlands Andy Street. Halesowen Beavers, Cubs, Scouts and Explorers also joined in the fun while raising money for worthy causes.

The 10K started at 9.45am from Somers Square with runners completing two laps around the town centre. Trevor Osborne was the winner in 35:46 followed by Todd Quiney of Dudley Kingswinford RC in 35:53. Carl Stainton of Warley Woods Pacers was third in 36:00.

An impressive run by Sophie Wood of Sale Harriers saw her win the women’s race in 37:40. Rachel Farquhar was second in 42:07 with Heather Bills third in 42:59.

Every finisher received a medal featuring the black, red and white Black Country flag and thousands of pounds were raised for charities.