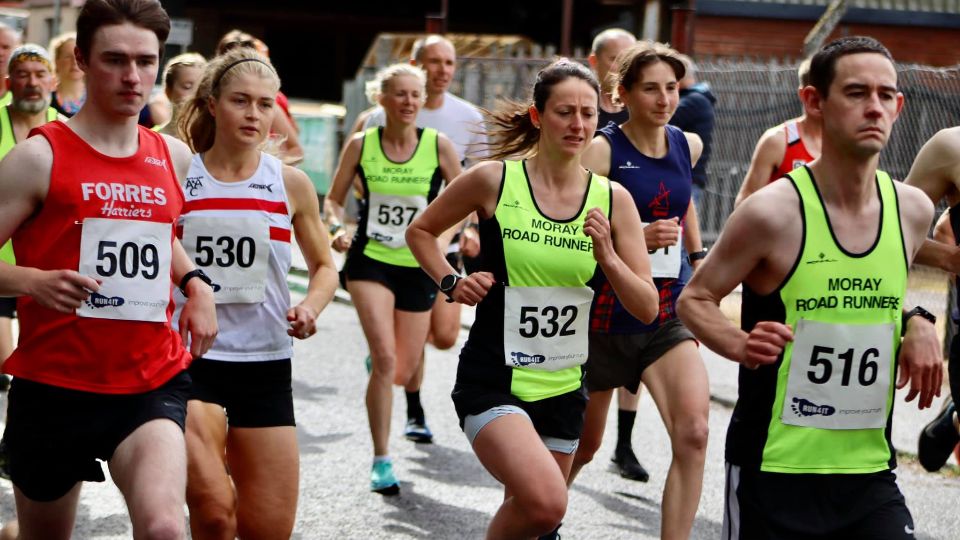 Back to Basics again in Forres

A win for Wilson and a new best for Barrand

North District runners took to the streets of Forres again on Sunday (4 July) for the latest edition of the ‘Back to Basics’ race series.

The free 10k events are organised by Paul Rogan of the Moray Road Runners with entrants drawn at random from those who express an interest in taking part.

Sunday saw just under 50 runners completing the now-familiar 10k route which starts and finishes near the Ben Romach Distillery.

The race was won by Scotland international and Moray Road Runner Kenny Wilson (32.11). Though he admitted after the race he didn’t have the best run in the humid and windy conditions, he still managed to best his teammate and training partner Ewan Wilson by 30 seconds (32.41). Blair MacKay of East Sutherland took the last spot on the podium (32.45).

Speaking after the race Wilson, whose 10k PB stands at 30.22, said, "I usually manage running on my own a bit better than I did today, but I don't know. Maybe I went off a bit too quick and then struggled a bit in the middle today for some reason."

Wilson, who is headed to London Marathon in October, added: “I kind of knew that the time wasn't on, so I just didn't force anything towards the end since there wasn't really a decent time on the board, I don’t think, from half-way onwards."

Crossing the line first in the women’s race after spending much of the race on her own and unable to hide from the wind was Ginie Barrand of Metro Aberdeen. Her time of 35.29 secured her ninth place overall and a new 10k personal best by around 15 seconds. Catriona Fraser of Inverness Harriers claimed second (36.41) and Jennifer Harrison of Aberdeen AAC third (38.05).

Full results for July can be found via the runABC Scotland results page.

Runners interested in taking part in the next event should keep their eyes on the North District RR & CC facebook page.