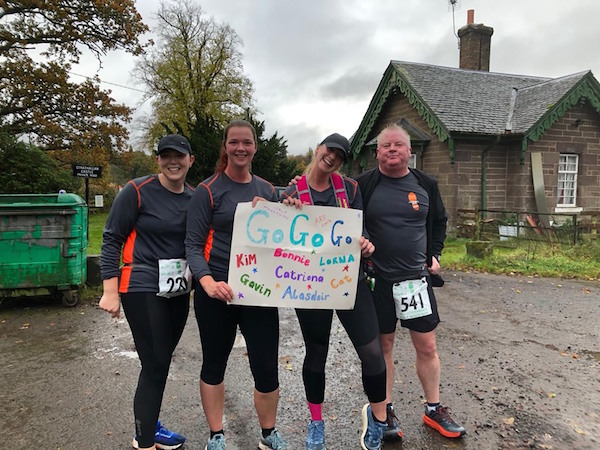 After a 10K road race with Judy Murray as official starter and a thoroughly drenched Half Marathon last weekend, both runners and organisers are gearing up for the third and final event of the 2019 Auchterarder Running Festival – a brand new 10K trail race – this Saturday (9 November).

Affectionately named ‘the Chilli’ after the shape the well-known local route makes on a GPS map, Saturday’s race will take in a mix of tarmac, mud, forest track and trails.

One of the newest festivals in Scotland’s running calendar, the ARF grew out of the Auchterarder Half, launched in 2017.

Buoyed by the success of their inaugural race, which sold out at 500 places, organisers Five Star Active launched a 500-runner 10K and increased places in the Half to 650 the following year. Both events duly sold out.

With the arrival of the 10K in 2018, organisers also introduced the Double Dare – the challenge of running both the 10K and the Half – with a specially designed interlocking medal as a reward for those who took it up this year.

Race organiser Steven Watt told runABC Scotland online: “In 2018 we had around 100 runners sign up to do both races; this year we had 226. It was amazing to think that one third of each race field was doing both events. The Double Dare is a challenge, but it’s achievable. Making people feel awesome is the whole idea.”

When asked why there was a week between the festival’s races, Watt explained that the timing was a bit of an accident of fate. “We had always wanted to do a trail run, and had it planned for November. The 10K and the Half were originally planned for September, but we had to change the date because of the Solheim Cup at Gleneagles, where the road races start and finish. When it came time to finalise dates, we decided to move the 10K and Half to the week before the ‘Chilli’ to make it a festival.”

Even in its first year, it’s clear that the ARF is going to be a huge success. Both the 2019 Half Marathon and 10K, with 750 places each, sold out within 24 hours of going on sale; all 300 places for the ‘Chilli’ were also snapped up. With feedback on last weekend’s races overwhelmingly positive, Saturday’s trail runners should also expect a well-organised event.

Watt said, “Our 10K and Half Marathon are hosted by Gleneagles, which gives us amazing facilities to access. It also means we do everything with finesse – to a five-star standard – and think about details all the time.”

He added, “My wife Fiona is race director and we’re both ultrarunners ourselves. We’ve tried to bring to bring to our event that ‘ultramarathon’ sense of fun that you don’t always find in road races.”

That sense of fun carries over to the legendary goody bags, which this year included a long sleeved t-shirt, Mars bar, Tunnock’s tea cake, hydration sachets, banana, water and 500ml bottle of beer from the Isle of Colonsay.

Watt added: “But the main thing for us as organisers is to make sure our events are inclusive. If people are worried they’ll take three hours to do the Half, we don’t want them to be; they should come do our race, finish, and feel like superstars!”