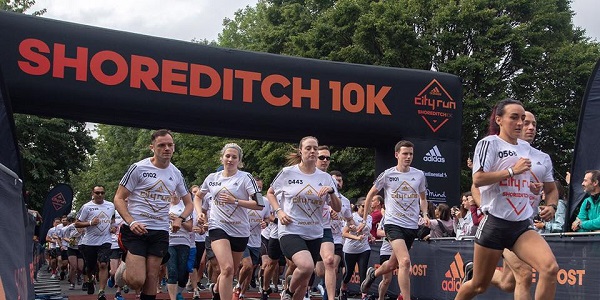 The vibrant, multi-cultural district of Shoreditch in London's Borough of Hackney came alive as a sea of nearly 4,000 white T-shirts surged through the historic streets around Shoreditch Park in the adidas City Run Shoreditch 10K on Sunday morning (14 July).

Course highlights in one of London's most colourful, creative and diverse regions included two strategically positioned DJ zones as the route doubles back on itself. Shoreditch Park hosted a busy event village with live music, and the Mind Cheer Zone at the halfway point near De Beauvoir Square gave runners an 'adidas Boost' just when they needed it most!

Lily Partridge (#568 above) of Aldershot, Farnham & District led from the start and went on to finish 41st overall (38:00) but did not win the women's race. That accolade went to Mireia Guarner (37:06) from Spain. Alice Sinclair (39:31) – primarily a parkrunner, with a best of 19:11 at Brockwell in May – enjoyed her debut 10K on the roads with a fine third place. Tracy Barlow (Thames Valley Harriers) retained her inaugural event record of 36:24 set in 2017.

At the head of proceedings there was a clear victory for Alexandru Corneschi (Romania, 32:29) in a new course record from Richard Lilley (Team COCO, 33:25 PB). Shane O'Neill (Dulwich Runners, 33:34) equalled his previous best in third place.

Nearly 100 runners were under 40 minutes and the next 1,000 were home before 50 minutes had appeared on the finish gantry clock – impressive running indeed.

Shoreditch 10K is part of a trio of adidas City Run events. The City Runs tour heads west for Fulham 10K on 17 November and the unique City Run 1 Hour was held on 7 April.

The event certainly got the thumbs up from Chloe Selwood (#0910 below) who finished 2,229th in 57:11. Also happy with his result was Fred Houinato (M40, 43:11) who posted: “Thanks for a super event, this was my first race after 25 long years of an injury-related break! Super excited finishing the race. Great atmosphere and people sharing around the track. I missed this”.