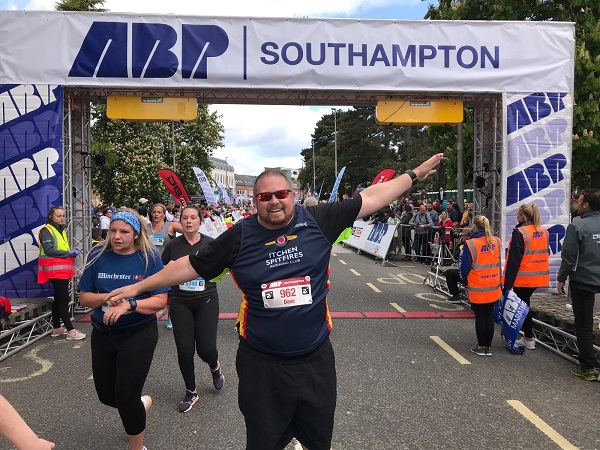 Waldron defends as 7,000 compete in Southampton

The slightly later date, now one week after the annual marathoners' pilgrimage to London, may well have contributed to an increased entry for ABP Southampton Marathon with more than 7,000 competing in the 26.2 mile race and supporting events yesterday (Sunday 5 May).

Our picture star, seen flying across the line in the 10K, is Dave Bray of Southampton-based Itchen Spitfires, who epitomised the joy of completing a major race. Dave was 1,994th (1:36:12) as 2,032 finishers were closed by his wife Janice Bray (Itchen Spitfires, 2:17:22).

So the scene was set for the arrival of the marathon finishers – all 1,050 of them inside seven hours. Making light work of the tough climbs over Itchen Bridge was defending champion Richard Waldron, who was through halfway in 1:14:33, which would have won the 13.1 mile race. The leader's pace did falter in the second half but he was not alone on this testing course.

Full results via this link to runABC South race listing