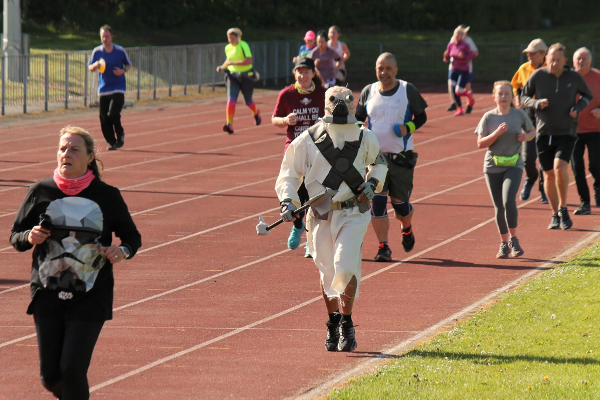 Hundreds out in force for epic Dudley parkrun

The force was strong at Saturday’s (4 May) Dudley parkrun as a record 392 people celebrated the 100th event on Star Wars Day. Stormtroopers, Sand People, Darth Vader and cake made it an out of this world parkrun.

This centenary parkrun took place in - not a galaxy far, far away - but The Dell Stadium, Brierley Hill in Dudley. Nearly 400 people, many dressed in costume, attended this special event and were joined by an Imperial stormtrooper AKA Steve’s Trooper Hire as part of May the Fourth.

Volunteers got in on the act as well with several brandishing lightsabers and Run Director Gavin Grosvenor was equally enthusiastic, wearing a wookie outfit for his final briefing. He is retiring as run director but will continue as an active participant with the 50th milestone T-shirt his next goal.

They started at 9am, completing two laps of the athletics track before heading out of the stadium and into the park, passing the outdoor gym equipment on their way to the canal. The sun was shining as they continued along the canal followed by a right turn on to grassland and gravel paths, trails and across the old freight railway. Back onto the canal, past the astro turf football pitch and into the stadium for a final two laps and the finish.

Everyone enjoyed the mouth-watering cakes, cookies and biscuits and tea from the Lil Happy Cafe. Any left-over cake was donated to a local care home.

In what was another weekend of big parkrun turnouts across the Midlands, Cannon Hill (1118), Clumber Park (453) and Wyre Forest (320) all saw record numbers. Further afield Banbury (426) and Fire Service College at Moreton-in-Marsh (334) recorded new highs and there was a similar story in Lincolnshire at Gainsborough (150) – at its 200th running – and Snowden Field (112).