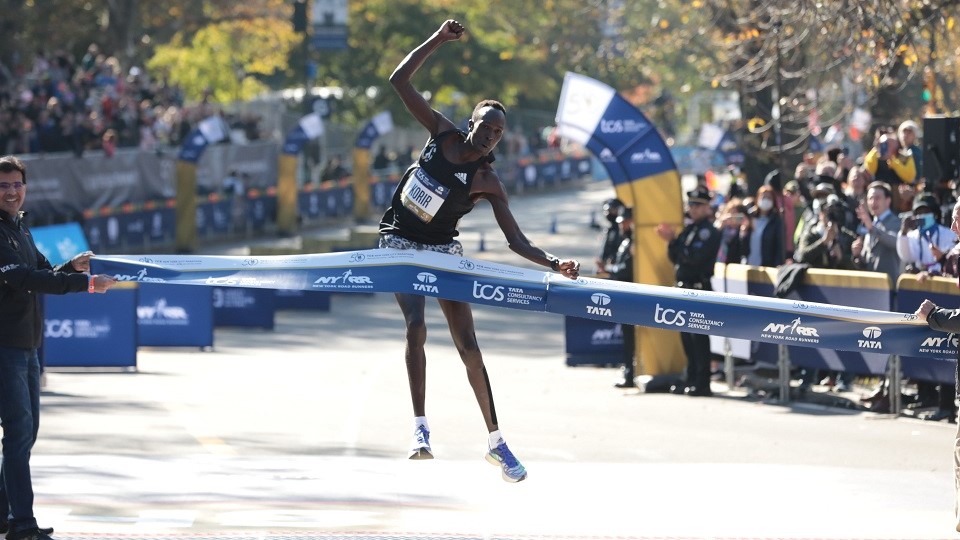 Just one competitor in the 50th TCS New York City Marathon on Sunday (7 November) had run in the inaugural event. Larry Trachtenberg paid $1 to race the first-ever NYC Marathon in Central Park as a 16-year-old in 1970 and was one of the 55 finishers from 127 starters, finishing 32nd in 3:22:04.

Five decades later, after more than 1.25 million runners have crossed the finish line in Central Park, Larry (67) ran through all five Boroughs that comprise this Abbott World Marathon Major to complete his first 26.2-miler since 1978 in a cruel nine seconds outside five hours.

Unsurprisingly, for an event that has not been held for two years, there was massive interest in the return of the NYC Marathon but entries were restricted to 33,000 and the start was held in waves over three hours for Covid risk mitigation reasons.

A record 53,639 had finished the 49th race in 2019 with fast (for this undulating course) wins for Kenya's Geoffrey Kamworor (2:08:13) and Joyciline Jepkosgei (2:22:38). The men's runner-up to Kamworor last time, Albert Korir, has clearly served his apprenticeship well as he emerged victorious in Central Park this year in 2:08:22, having overturned a one-minute deficit at halfway.

Morrocan Mohamed El Araby (2:09:06) was the early leader with Italy's Eyob Faniel (2:09:52) and both stayed the course to join Korir, of Kenya, on the podium. The 16-time world champion and second fastest-ever marathoner, Kenenisa Bekele (Ethiopia, 2:12:52) was a subdued sixth.

The women's race was one of the best quality and most exciting New York Marathon's ever. Peres Jepchirchir (Kenya, 2:22:39) only pulled away in the final straight to become the first woman to win Olympic gold and NYC Marathon in the same year. Jepchirchir was pressed hard for the win by Viola Cheptoo (Kenya, 2:22:44) and Ababel Yeshaneh (Ethiopia, 2:22:52).

In a race of so many memorable highlights here are a few chosen by runABC reporter Alan Newman:

The new NYC Marathon Race Director and lifelong New Yorker said: “I came out here as a young event producer, ready to do anything and everything. There's not much about this event I haven't seen or been part of; the start and the finish. Here I am leading the charge, working with some of the greatest in the country with my staff, here in the greatest city of the world".