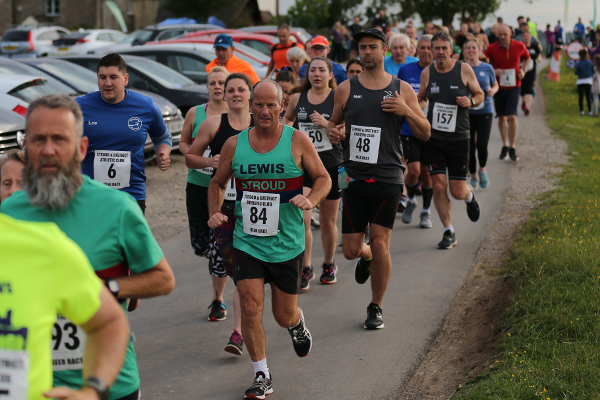 They run for beer at Stroud

It was thirsty work at Monday evening’s (2 June) hilly Stroud Beer Race. However, there was a free, half pint waiting for the runners at the end.

Stroud Beer Race is one of three events in the Roger Briers series along with the Standish Woodland Chase and Woodchester Park. Organised by Stroud & District AC these are hilly races open to club members and other runners who like a challenge. There is a medal for each race with all three creating an interlocking showpiece and a collector’s item.

This first race in the series was held on a mild, breezy evening in Gloucestershire and started at 7pm from, rather appropriately, the Old Lodge Inn. The runners faced 7.2 miles over three hilly laps, on roads, around Minchinhampton Common near Stroud but the thought of a beer at the finish kept their minds focused on the task ahead.

It was a productive night for the organising club beginning with Lee Stopford winning the Beer Race in 38:25 and claiming the club record. He was followed by teammate Ian Newns in second place (42:31). Alex Souden was third in 44:26.

Chrissie Horak, also of Stroud & District AC, was the winning female in 50:05. Helen Knight of CLC Striders was close behind to finish second in 50:12 followed by Nicola Denning of Cirencester AC in 52:53.

There was a barrel-themed medal for every finisher along with a beer, the latter courtesy of the sponsor Stroud Brewery.