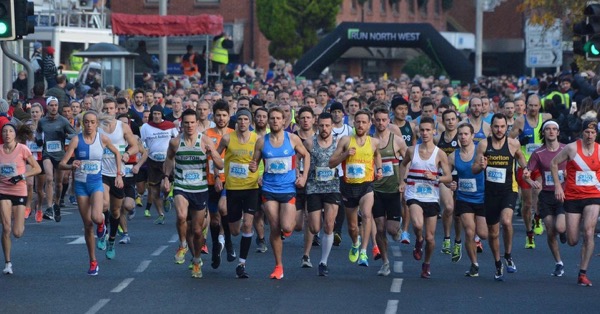 Wilmslow Festive run closing in on sell out

There are just a small number of places remaining for what has become one of the best attended winter runs in the UK, the Wilmslow Festive 10K. Of the 5000 places made available for Sunday 24 November, organisers have revealed there are less than 250 to be snapped up and are expected to go very soon.

Organised by Run North West, the team behind the Alderley Edge 10K and Trafford 10K, the Wilmslow race has quickly established itself as one of the most popular festive events in the region. For each of its three years, the race has had to increase entry capacity to keep up with growing demand.

A big draw for runners is the fact it also provides a great PB platform due to its point-to-point course which moves out of Wilmslow, along Knutsford Road before heading back round to Burleyhurst Lane and finishing on Mobberly Road.

Last year saw Eilish McColgan produce a stunning display (on her birthday) to take first in in 32:39, placing her 8th overall, and 50 seconds ahead of her closest competitor, Kate Reed (33:29). Louise Jackson took third in 35:07.

In the men’s field, Callum Rowlinson hit a huge PB to claim first in 31:36 – close to 30 seconds quicker than his previous fastest over 10k. The Sale Harrier had a 15 second lead ahead of Jonathan Carter (31:52) and Andy Benson (31:53) who were locked in an intriguing contest for the remaining podium positions.

You can still enter the Wilmslow Festive 10K here.